Jacob Charles Lehman Jr. was born on August 28, 1926, to Jacob and Eleanor Lehman who then lived in Paoli, Pennsylvania. He was the youngest of three children

Jacob, who preferred to be called by his middle name, Charles, was an outstanding football player at Tredyffrin-Easttown High School. He was on the football team as well as track.

Charles entered the U.S. Air Force in the fall of 1949, and was eventually assigned as bombardier on board a B-26C bomber with the 162nd Tactical Reconnaissance Squadron, 543rd Tactical Support Group. He was sent to the Korean War zone toward the end of 1950.

On January 5, 1951, as it was lifting off for a combat mission from the Taegu Korea Air Force Base (K-2), Charles' aircraft crashed killing all aboard.

Second Lieutenant Jacob Charles Lehman Jr. was Killed in Action after having served in the Korean Theater of Operations for only six weeks.He was awarded the Purple Heart, the Korean War Service Medal, and the United Nations Service Medal. 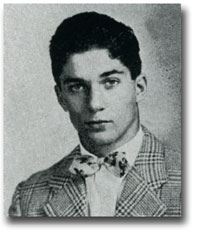