Carl Palmer Brooks was born in July 10, 1928 to William and Loretta Burgein Brooks who lived in Coatesville. He was the youngest of five children. His father worked at Lukens Steel Company.

Carl was a member of the Coatesville YMCA and attended Coatesville’s Scott High School.

Carl enlisted in the Army in January, 1946 and after basic training served 10 months in Alaska. He was mustered out (left after his enlistment was completed) in July, 1947.

Carl obtained employment at the Welded Steel Shapes Company but he decided to return to the Army. He reenlisted and was sent to serve with the forces stationed in Japan, and later Korea, formerly occupied by the Japanese who invaded during World War II. Carl was assigned to the 5th Cavalry Regiment of the 1st Cavalry Division. 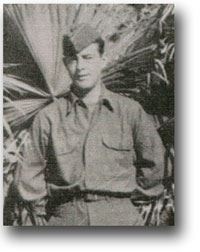 On June 25th, North Korean forces without provocation invaded South Korea. Our occupation forces as well as South Korean forces were caught completely by surprise. Allied forces formed a rapid retreat to the Pusan Perimeter and intense fighting ensued. The enemy was trying to push allied forces into the sea, while our forces were trying to hold the line until reinforcements and supplies could reach them from Japan. The 1st Cavalry division was responsible for holding the Pusan Perimeter line. On August 17th, the enemy tied the hands of 41 American Soldiers behind their backs and murdered them, known as the Massacre of Hill 303. Carl was not one of these 41 but these men were from his unit. PFC Carl Palmer Brooks was Killed In Action on August 8, 1950 in South Korea. Funeral services were held on May 5, 1950. Carl was buried with full military honors at the Fairview Cemetery in Coatesville. Carl was the first combat casualty from Chester County in the Korean War.