Robert D. McLaughlin  was born on August 11, 1929. He was the son of Rufus and Anna Schulmeister McLaughlin of Pomeroy, Pennsylvania. His father worked at Lukens Steel Company in Coatesville. Robert’s paternal grandfather was Edward McLaughlin of Youngstown, Ohio. He was the second oldest in a family of eight children.

Robert attended school in Pomeroy. He was a member of the Pomeroy Fire Company and the Pomeroy Methodist Church. Robert was very proud of his 1939 green Ford, which he paid for himself by driving a U.S. Mail truck. Before entering the service he was employed by the Reynolds Spring company at Pomeroy.

Pfc. McLaughlin was called to active duty on March 22, 1951. He received 14 weeks military training at Fort Knox, Ky. He was a member of the Third Armored Tank Division that left for Korea on July 23, 1951. He was assigned to the 38th Infantry regiment, 2nd Infantry Division. 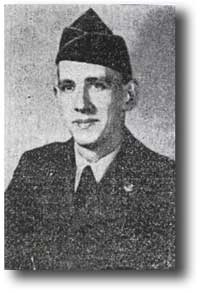 Letters from Robert to his family received after he landed in Korea indicated that he was engaged in hand-to-hand fighting soon after he arrived. Due to the mountainous terrain, it was impossible to use tanks on the front where he was located. He took part in some of the toughest fighting of the war, up until the time he was killed in hand-to-hand combat at Trilri, Korea, on Sept. 12, 1951. Funeral services on April 27, 1952 were attended by a large number of friends and relatives who paid their respects at the Wilde funeral home in Parkesburg. Interment was at the Upper Octorara Cemetery. The Parkesburg VFW Post 4480 and the Parkesburg American Legion Post 431 stood honor guard for the viewing; the military ritual continued at the grave which came to a close with the firing of the salute, as the casket was lowered. Pfc. Robert McLaughlin has two namesakes. His brother George had a son who was named after Robert, and he in turn named his son Robert. Both are living in Florida. Brother Clyde was drafted and stationed in Panama.