Walter K. Rutledge was born on January 31, 1928. He had five brothers and two sisters.

Walter was married and the father of  son, Ronald.

Walter was a member of the 1st Shoran Beacon Squadron, U.S. Air Force, in Korea. On October 31, 1952, his family received a letter from the commanding officer of the New Castle Air Force Base that gave strong indication that twenty-four-year-old Walter, reported missing in Korea several weeks prior, was no longer alive. However, no official word was received from the War Department. Previously it was reported two bodies, identified as being from the same plane, had floated onto the beach about ten miles from Kangnung, Korea.

Rutledge was a chauffeur and truck driver and was serving his second enlistment with a rank of Airman 3/c. Bruce, a brother and Seaman 1/c serving on the U.S.S. Catling, made a surprise visit home, unaware that their brother had been reported missing. 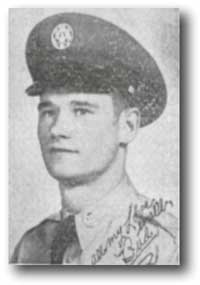 November of 1952, Walter's parents were notified by the director of military affairs that their son was now reported as dead. Airman Third Class Rutledge was a passenger on a C-46 Commando Transport aircraft when it crashed while in route from Kangnung to Phang, Korea. Walter was one of 21 passengers reported missing when the plane disappeared. His date of death was October 16, 1952.  Walter was awarded the following medals Memorial Services were held on November 16, 1952 at the Westwood Union Church.
Today, he is buried at Glenwood Memorial Cemetery in Broomall, Pennsylvania.