Ernest E. Orendorff Jr, was born on April 8, 1945 to Ernest and Mary Orendorff who resided in West Chester, Pennsylvania. Ernest was one of four children.

Ernest graduated from Bishop Shanahan High School where he played on the varsity basketball team. After graduation Ernest obtained employment with the James Brothers Plumbing. He was a member of the Saint Simon and Jude Roman Catholic Church.

Ernest enlisted in the Marine Corps in February, 1964. After basic training he received advanced amphibious warfare training and was assign to the Third Battalion, Eighth Marine Regiment, Second Marine Division of the Fleet Marine Force, stationed at Camp Lejeune, NC.
In May 1966, Ernest was promoted to the rank of Corporal and sent to Vietnam.

Corporal Ernest E. Orendorff Jr. was Killed In Action on August 3, 1966 by a landmine, near Da Nang, in the Quang Nam province.Ernest was returned home for burial. Services were held at the Lawrence O’Reilly Funeral Home.  A funeral Cortege then proceeded through West Chester to the Saint Simon and Jude Roman Catholic Church for High Requiem Mass. Burial with full military honors followed at St. Agnes Cemetery. 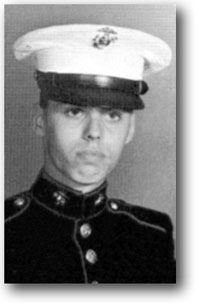