John R. Bartosh was born on June 6, 1924. His father, John Sr., emigrated from Czechoslovakia. His father served in the Army in World War I and was wounded in Alsace Lorraine. John, Jr. had two sibilings.

John attended Tredyffrin/Easttown High School. He played varsity football as tackle, and played the violin in the school orchestra. John was an accomplished violinist. During his senior year, the Philadelphia Orchestra held auditions for talented high school musicians to accompany them in a production of Gilbert and Sullivan's HMS Pinafore. John was one of the few students chosen to accompany them at the Academy of Music.

John graduated in 1942. He pursued his talent, but also worked as a crane operator to pay the bills. 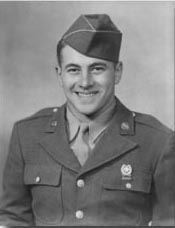 John enlisted in the Army in 1943. He received training as a Sherman Tank gunner and was sent overseas in the summer of 1944 and was assigned to the 8th Armored Division. He landed in France in January, 1945. The 8th Armor (Thundering Herd) was assigned to support the northern end of the allied line of advance. They drove the Germans back across the Saar River, then were sent into Belgium to advance east into Germany, and the Rhine River. They continued east driving towards the Elbe River and encountered the 11th Panzer Division near the Harz Mountains. After several days of hard fighting they defeated the Panzers. After the Germans surrendered, they were sent into Czechoslovakia, where John used his skill as an interpreter. John later became part of the occupation force in Germany. In January, 1946 he was stationed near Regensburg. His unit was running out of supplies and John volunteered to drive a truck to the depot. On January 10, 1946, the truck became stuck on the snow covered icy roads. In an effort to free the truck, it slid, rolled over and killed John. His unit held a memorial service. John was buried in the Lorraine American Cemetery, St. Avold, France. At home, St. Monicas held a memorial mass.   His employer, upon hearing of the loss, wrote to John's father: "I have often said that if I were to have a son I would not want him to be a bit different than Johnnie. If ever there was a perfect specimen of young man, it was he, and then too he was such a clean living and dependable boy."