Albert J. Caraciolo was born on December 3, 1923 to Dominic and Josephine of West Chester, Pennsylvania. Albert was one of eight children. His parents owned and operated a grocery store.

Albert was known as a quiet, but fun loving guy. His neighbor, Sam Ricardo remembers that he was a talented sketch artist and sketched the Chester County Courthouse and the "Old Glory” monument.

Albert graduated from St. Agnes High School in 1941. He then obtained employment as a welder at the John Wood Company in Conshohocken.

Albert entered the Army in late 1942. He received basic training, then trained as a paratrooper, earning his silver wings in February, 1944. He returned home on a 12 day leave in March, the last time his family saw him alive.  After visiting home, he was sent to Fort Benning, Georgia for advanced training, and then overseas to the European Theater in April, 1944. 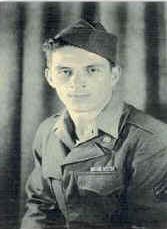 Albert served with the 517th Infantry Parachute Combat Team - one of the Army’s first elite combat units in WWII, and the only independent combat team that served in the European Theater during the war. It was composed of the 517th Parachute Infantry Regiment, the 406th Parachute Field Artillery Battalion, and the 596th Parachute Combat Engineer Company. These units originally came from the 17th Airborne Division. Albert was assigned to Company C of the Parachute Regiment.  The 517th  PRCT entered combat in Northern Italy in June, 1944. They parachuted into combat to support the landings in Southern France “Operation Dragoon” in August capturing St Vallier. The 517th fought in a number of battles in the advancement through France.

The night of December 15-16, the Germans launched their last great offensive during that unusually harsh winter. Three German armored divisions attacked weakened allied positions in the Ardennes region of Belgium and Luxemburg. The attack achieved surprise, and they broke through our lines. Due to the severe weather, our aircraft were grounded, and air support and supplies were not available for several days. This became known as the Battle of the Bulge – as the German offensive created a huge bulge in our lines. The 517th PRCT was sent into action along with a number of other divisions and units. There was a mad rush to stop the German advance and to reinforce our lines. Company C of the 517 PRCT was sent by trucks (poor weather prevented airlift), to Stavelot, Belgium. From there they advanced in the town of Coules, and on to Logbierme. Albert’s unit then came under heavy sniper fire, It was during this battle that Albert lost his life. Corporal Albert J. Caraciolo died on January 14, 1945 in Belgium. His parents received the telegram on January 29th, but it included very little information. His mother tried in vain to find out about her son’s death. She published notices in September that she would gladly pay expenses or telephone charges for anyone who could provide her with information on her son's death. Albert was initially buried in France, at the Rhone American Cemetery, in Belgium, but was returned home in November, 1947. On November 8, 1947, a military funeral was held at his parent’s home followed by Solemn Requiem Mass at St. Agnes Church in West Chester. Albert was buried at St. Agnes Cemetery with full military honors.  Corporal Albert J. Caraciolo received the following medals:
His brother, Private Anthony Caraciolo, served in the Aleutians.

His mother published a verse titled To my Soldier Boy to honor the loss of her son. 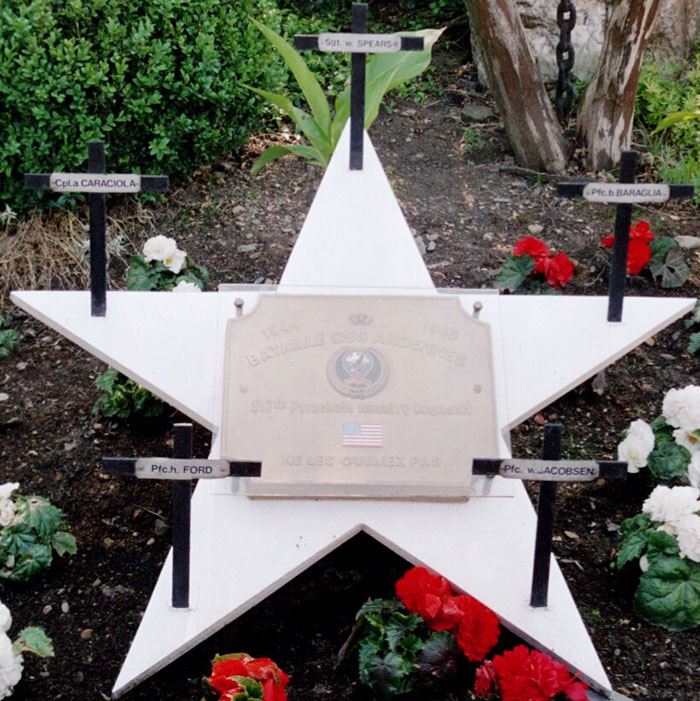