William Leon Carey Jr., was born on April 12, 1922 to William and Ida Harple Carey in West Chester, Pennsylvania. His father was a World War I veteran and worked as a fireman, feeding coal into steam locomotives for the Pennsylvania Railroad. The family moved to Phoenixville in 1923. William Jr. was one of four children.

William graduated in 1940. After graduation, he worked for the Phoenixville Iron Company, and later as a plumber. William married Florence Smiley of Kimberton.

William entered the Army on October 15, 1942, and received training at Camp Shelby, Mississippi, as part of the newly activated 85th Custer division.

William was sent overseas on December 24, 1943, to North Africa where he received a Good Conduct ribbon and the African Campaign ribbon with Combat Star. He served with the 82nd Custer division, part of the Fifth Army, the same division that Hero Leroy Barnes served. 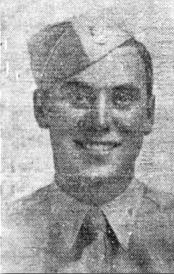 The 85th was the second all-draftee division to enter combat during World War II. They received advanced training in the swamps of Louisiana, and desert training in Camp Pilot Knob and Camp Cooks Comb in California.  William’s division arrived overseas at Casablanca French Morocco, in North Africa in January, 1944. They received amphibious training in Algeria and then moved on to Naples on March 28th. The division was sent north of the Garigliano River to defend against the GUSTAV Line, The GUSTAV Line was a German heavily fortified defensive line south of Rome which virtually grounded the Allied forces to a halt. William was wounded in his leg by shrapnel on April 2nd. On May 11th the division launched its attack against the GUSTAV Line. Private First Class William Leon Carey Jr. was killed in action on May 12, 1944 in Italy. He was survived by his wife, Marian Smiley Carey. 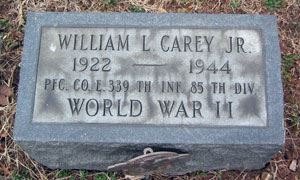