Edward R. Davis was born in 1912 to William and Anna Davis who lived in West Chester, Pennsylvania. Edward was the third of seven children.

Edward liked to be called “Jerry”. He was known as an outstanding baseball player in the community baseball league. He was a member of the Goodwill Fire Company.

Jerry entered service in the Army on March 3, 1942. After basic training, he was stationed with the 862nd Guard Squadron at Hamilton Field in California.

Private Edward R. Davis Died Non-Battle on August 18th, 1943, in California. His body was transported by train to Philadelphia by military escort. Funeral services were held at the Hicks Funeral Home. The guard of honor was formed by Soldiers from the Army Administration School at West Chester State Teachers College and members of Bernard F. Schlegel American Legion Post. Interment followed at Green Mount Cemetery with the guard forming a firing squad to render honors.

His brothers Earl ‘Ned’, and Charles ‘Poppy’ also served during the war.

In 1946 his family posted a photo of Jerry in the Daily Local News with the following memorial:


In loving remembrance of our dear son, Private Edward R. Davis, who passed away on August 18, 1943, at Hamilton Field, California.

You entered the service and went away.
We had no idea you went to stay.
A telegram came that brought us tears.
It’s memory will carry through all our years.

We changed our star from blue to gold
The memory of it can never be told.
And within our hearts so true
Remains our precious love for you.

Since you’ve gone first, and I remain,
One thing I would have you do.
Walk slowly down the street of gold,
For some day I will follow you.

I want to know each step you took
That I may walk the same. 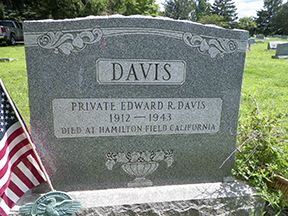