Joseph Lewis Douglas was born in 1919 and resided in West Grove, Pennsylvania. He was one of six children.

Joseph attended Avon Grove schools where he was an honor student. He was a member of the Avon Grove Baptist Church. He loved baseball and was known as fun loving with a good sense of humor. .

Joseph enlisted in the Army in August, 1940. He was sent to Fort Dix, New Jersey for basic training. He was sent overseas and landed in North Africa, at “Operation Torch” in November, 1943.

Private Joseph Douglas became seriously ill after a few months, and was treated at military hospitals.His illness worsened, and he died on April 12, 1944. Services were held on April 14th at the Eastburn Funeral Home in Avondale. Joseph was buried in Oxford.

His brother Lester served in the Army during the war. 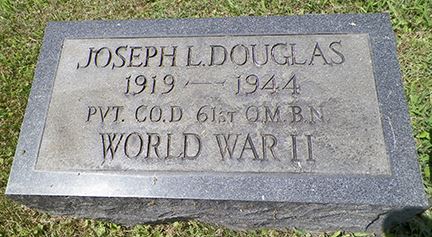