Charles Edison Garvine was born in 1926, to Edison and Hannah Russell Garvine who lived at in Coatesville, Pennsylvania. Charles was their only child. His father worked as a Ladleman at Lukens Steele Company.

Charles graduated from the S. Horace Scott High School in 1943.

Charles and Henry Mariano, were best friends and always together. Henry remembers that Charles always had a big smile on his face, was loved by everyone, and the girls chased him. 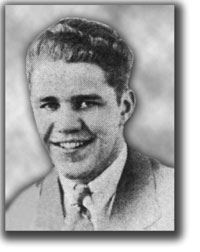 Charles returned home on leave to spend Easter, 1944 with his family. His regiment shipped overseas to England two weeks after he returned. Charles’s division landed at Omaha Beach in Normandy on June 23rd (about 2 weeks after the D-Day invasion). His division entered combat on June 23 near Villiers Fossard in Normandy. They helped in the break out from St. Lo in late July. They were then pulled off the battle line for a few days of rest and re-supply and then were ordered into battle on August 7th to stop a major German counterattack towards Avranches. Charles’s unit became heavily engaged with German Panzer Tank Divisions of the German 7th Army, near Les Menil Tove on August 9th. After a pitched four day battle, Charles regiment defeated the Germans. Private Charles Edison Garvine was Killed In Action on August 9, 1944  in the battle for St. Lo, France. His parents received the telegram from the War Department informing them of their son’s death, on Wednesday August 30th. Charles was buried in the American Military cemetery at Marign, France. A Military Mass was held on September 11t, 1944 at St. Cecilia’s Roman Catholic Church.   Charles was returned home to his home country in 1948. His remains were transported back on the SS Lawrence Victory, and carried by military hearse to the Archie S. Maclean’s funeral home. Staff Sergeant R. C. Huddy served as military escort.  A Solemn High Requiem Mass was held at St. Cecilia’s Church on September 18th.  Members of the Sahler-Sedan VFW Post in the city stood as a Military guard of Honor. Henry Mariano frequently visited Charles’s parents, because of their closeness, and out of respect.  However it proved too difficult for Charles mother, Hanna, and would often send her into tearful depressions. Edison and Henry privately discussed this reaction, and agreed to refrain from visiting their home for Hannah’s sake.