Charles Frank Hess was born on October 22, 1922 to George and Carolina Hess who lived in Philadelphia.  When he was young, his parents moved to a farm in New London, Pennsylvania. Charles was one of six children

Charles graduated from Avon Grove High School in 1940. Charles was known as nice person with a deep faith. He attended the New London Presbyterian Church. He loved hunting, fishing, and any outdoor sports.

Charles attempted to enlist in the Army Air Corps as a pilot after graduation from high school but his eyesight was slightly off the strict requirement of 20/20 vision. He then began a regimen of consuming large quantities of carrots to improve his marginal vision problem.

Charles enrolled and attended Lincoln University.  After his second year at Lincoln, he again attempted to enlist in Army Air Corps in late 1942. He was accepted. 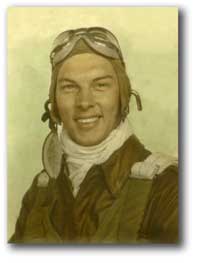 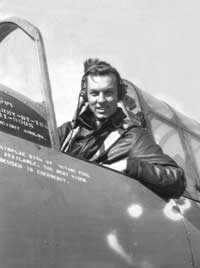 Charles was sent to flight school in Albany Georgia in November 1942. He then went to advanced flight school in Greenville, Mississippi in February 1943. Charles was then sent for Multi-engine training at George Army Air Field in Lawrenceville, Illinois, where he graduated and was commissioned a 2nd Lieutenant   in April 1943. He was a B-17 Bomber Pilot. Charles was then sent overseas to England to join the 8th Airforce. Charles served with the 613th Bomber Squadron of the 401st Bomber Group Heavy, based an airfield named Station 128, near Deenethorpe, Northamptonshire County, England Second Lt. Robert W. Rowe, Charles Bombardier and close friend wrote that Charles “…was the best damn bomber pilot that ever sat in a cockpit”. He also recalls Charles “…was good with his hands and spent a good deal of time making useful items out of junk cast off by the military.   He made a bed out of old shipping crates, ash trays out of old ammo casings and lights out of chunks of wood and bits of metal.”
On Charles’s second mission they bombed Solingen Germany, in the industrial Rohr River Valley. His B-17 was heavily damaged losing  engines #3 and #4 on the same wing. The aircraft should not have made it back to England, but he did make it back. A crew member recounts the mission:

“The crew reached the target and bombed, however, enemy opposition, both air and ground, caused the loss of No. 3 and No. 4 engines. Enroute home, flying at 2,500 feet, the action of the ship made it seem almost impossible to cross the water and reach England. Lt Hess issued an order to the crew members to prepare to bail out. On checking with the crew again about ten minutes later he could not contact any of the Enlisted crew members by interphone. Going to the rear of the ship, the Copilot found that they had all bailed out. This occurred approximately 50 miles due east of Brussels, Belgium. The four officers remained with the ship and, in spite of terrific difficulty, successfully reached the English coast, landing at Manston.”

Quoted from the 401st Bomb Group Association Website
Charles was awarded the Distinguished Flying Cross for this mission. On June 12, 1944, Charles flew a mission against a German airfield in Vitry-en-Artois, France. With the conclusion of this mission, he completed the then required 25 missions (later the requirement was increased to 35). Very few survived the 25 mission mark early in the war; 80 % of the bombers were shot down in the first three months of missions over Europe. Indeed the B-17 named the “Memphis Belle” became a National Icon, when it was the first to complete 25 missions on May 17, 1944. Visitors can see the “Memphis Belle” converted for the movie of the same name, at the Mid Atlantic Air Museum’s World War II Weekend held in early June each year. Charles was awarded the Oak Leaf Clusterng for Distinguished Flying Cross. His citation reads:  "For extraordinary achievement while serving as a pilot of a B-17 airplane on a number of bombardment missions over enemy occupied Continental Europe. Displaying great courage and skill Captain Hess has materially aided in the success of these missions and his actions are an inspiring example for fellow flyers.  The courage and skill displayed by Captain Hess on all these occasions reflect the highest credit upon himself and the Armed Forces of the United States.” Charles returned home after completion of his tour. While away, Charles frequently corresponded with family members, and sent birthday cards and letters to his nieces and nephews. When Charles returned to service, he was assigned to the newly formed 1st Scouting Force (Experimental) which was based at Honington, England, following his former 401st Operations Officer, Col. Allison C. Brooks. This was an experimental concept of using a small force of P-51 Mustang fighters as mission scouts for bomber missions. Charles was promoted to the rank of Captain and began training as a fighter pilot.   On October 24, 1944,Charles was in a P-51 Mustang for his checkout flight. Immediately after takeoff, the engine started smoking and losing power. He tried to regain control and turn around, but was loosing altitude. His efforts to regain control were unsuccessful, but because of his effort to save the aircraft, he bailed out so low, his parachute did not have enough altitude to fully deploy. Captain Charles Francis Hess was buried at the Cambridge American Cemetery in England, with full military honors. He received the Purple Heart posthumously. Hugh C Morgan, principle of Avon Grove High school wrote to Charles’ sister Gladys upon hearing of his death.  In the letter he wrote:


“…I watched with keen interest Charles’ dogged determination to get ahead in the Army….He was apparently showing the same determination to become a pilot that he had shown in high school in sticking to his job in the face of difficulties which would have hopelessly discouraged many boys."
"I had looked forward to the day when he would return and I could personally congratulate him and present him to the Avon Grove students. Instead he becomes the first Gold Star on Avon Grove’s service flag."
"Time will heal your sorrow, Gladys, and you will always be proud to have had such a brother, one who was true to the best and who gave everything that he had. I am proud too to have known him and to be able to share in some measure your sorrow and your pride."

His brother William served in the Army and his sister Gladys served in the Navy as a WAVE, in WWII. His nephew, Richard, followed in his uncle’s footsteps and became a pilot in the United States Air Force obtaining the rank of Major.