Joseph P. Mraz was born in 1920 to Joseph and Anna Mraz who lived in Bethlehem, Pennsylvania. Joseph P. was the second oldest of four children. His parents immigrated from Czechoslovakia in 1900 to begin their new family. Joseph’s father worked at a steel mill. He moved his family to Phoenixville, Pennsylvania after 1930.

Joseph entered service in the Army on March 2, 1942. He received basic training at New Cumberland, Pennsylvania then further training at Camp Wheeler, Georgia.

He was shipped to Hawaii where he was assigned to the 35th “Cacti” Infantry Regiment of the 25th Infantry “Tropic Lighting” Division, the same Regiment that Hero John Toth and Frank Pinter served. The 25th Division was shipped to Guadalcanal in January, 1943 to relieve the 1st Marine Division. After the Japanese gave up and evacuated Guadalcanal in the summer of 1943, Joseph’s division made plans to move up the Solomon Islands capturing key islands in the chain, including Kolombngara, New Georgia. 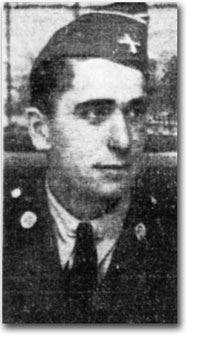 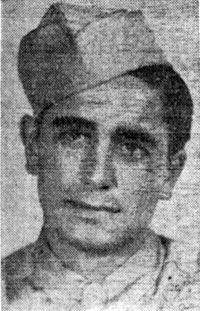 The Division mounted an amphibious assault on Vella Lavella in the northern Solomons on August 15th. Joseph also saw service on New Herbrides. His division received a well-deserved rest as well as replacement of equipment in New Zealand in February, 1944. In a letter Joseph sent from Auckland, he says he finds it a nice place and the people there very friendly. He was in good health and wrote he has plenty of everything “especially food”. He also said that some local men from Chester County were with him. They were Mike Meklos, John Romen and Paul Moryak. Joseph’s division was then sent to New Caledonia for additional training through the summer and late fall, preparing for the liberation of Luzon, Philippines. Staff Sergeant Joseph P Mraz was Killed In Action on Luzon, on February 1, 1945. He was buried at the St. Barbara Military Cemetery, on Luzon. Joseph never was able to return home during his service, since the time he entered the Army.
His remains were returned to his home country for reburial on board the Lt. George W. G. Boyce (a “Victory” ship of the Army Transportation Corps AK-251) with 4,459 other heroes being return home. High Requiem Mass was held on Tuesday June 22 at the Sacred Heart Church, followed by burial with full military honors.  His mother received Joseph’s last letter, written the day he was killed, part of which reads:

I am well, but busy. Don’t worry if you don’t hear from me often. We are doing a good  job over here; the Japs are on the run and the quicker we do our job, the sooner I will come home.