John Charles Murphy was born on February 7, 1921, to Daniel and Grace Denny Murphy. His father Daniel G. was the Judge for the Pennsylvania Workman’s Compensation Board. John was one of three children.

John enlisted in the Army Air Corps on August 17, 1942.  He was sent to San Antonio, Texas for Basic Training, then to Albuquerque, New Mexico for advanced training as a Radar Bombardier, were he graduated with the rank of 1st Lieutenant on February 26th 1944. 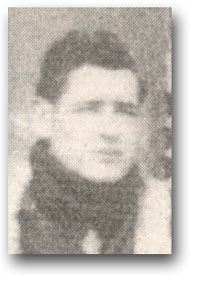 John was sent overseas in August, 1944 to serve with the 787th Squadron, 466th Bomb Group, of the 8th Army Air Force stationed at Attlebridge, England. The 787th Squadron flew B-24 Liberator heavy bombers; his B-24 was nicknamed “The Black Cat”.  On April 21, 1945 a mission to bomb Salzburg, Germany, “The Black Cat” aircraft was heavily damaged by antiaircraft fire and exploded over Regensburg. Eight of the 10 crewmen were killed, including John. Ironically, this was the last bomber mission over Germany, and the “Black Cat” was the last bomber lost in combat in the European Theater;  This mission was scrubbed due to poor weather over the target, and the group was turning around to return home.  The “Black Cat” was the only aircraft destroyed on this last mission.  His parents received notice that John was Missing In Action onMay 8, 1945. In June, his designation was changed to Killed In Action. John received the Air Service medal with two clusters, and the Purple Heart.  Lieutenant John Murphy’s body was returned to his home country, and he was buried at Glenwood Memorial Gardens, in Broomall.  On May 24, 2003, honors were finally given and a marker laid on John C. Murphy's grave site. Through the diligent research and fundraising of family and comrades at arms, Lt. Murphy's life, heroism, and service to country were celebrated and honored at a graveside ceremony. Read the article in the Philadelphia Inquirer.