Charles B. Parke was born on September 11, 1923  and grew up in Spring City, Pennsylvania. Charles was one of three siblings. He attended Sunday School and church at the First Evangelical and Reformed Church. Charles graduated from Spring City High School on May 30, 1943.

Charles received a furlough to return home from west coast to visit his family and friends. His brother Russell, who was a Seaman 1st Class in the Coast Guard stationed in Texas, planned to return home on leave at the same time. Charles requested and was granted a seven day extension so he could be home during his brothers leave - they had not seen each other in over a year - but he later learned Russell’s leave was cancelled. 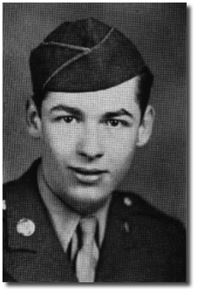 Charles was then shipped to the Pacific Theater of Operations in September, to Oahu, Hawaii. From there, he went to the invasion of Okinawa which began on Easter, 1945. Charles went ashore with the Third Signal Battalion at the beginning of the invasion. His brother, Russell was serving on board the transport Joseph T. Dickman AP-26 which supported troops landing on a different beach on Okinawa. His parents received letters in June including photos of his buddies, and some souvenirs. He wrote that conditions were much better on the island, as it was finally secured. Private First Class Charles B. Parke Died Non Battle on July 29, 1945. Surviving nearly four months of combat, he died when his gun accidentally discharged while putting it away. After the war at the request of the family, Charles’ remains were brought back to his home country aboard the transport Dalton Victory for his final rest. Services were held at the Nelson Funeral Home on  March 19, 1949. A full military funeral was conducted by veterans organizations at the Zion Lutheran Church Cemetery.