Arthur graduated from Downingtown High School in 1943. He played in the school’s orchestra and was a member of the French Club. The yearbook describes him as:  "a swell fellow, loves fun, and was nicknamed “Pick”. He was also described as loving Smilin’ Jack and the Shadow - a comic strip about a dashing aviator which ran from 1933-1973, The Shadow was a popular fictional crime fighter (his famous saying was “The Shadow knows”) which was best known for its serial radio broadcast in the 1930’s-1940’s.

Arthur began service in the Army on November 2, 1943. After basic training he was assigned to the 135th Infantry Regiment, 34th Infantry Division (the "Red Bulls"). This is the same Regiment and Division that Hero Norman Becker served. 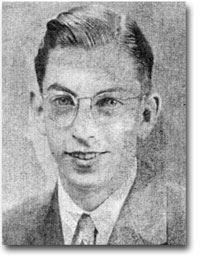 The 135th Infantry Regiment served Tunisia, North Africa, and then moved to Italy, landing at Montemarano in September, 1943. They participated in the fighting to liberate the Montaquilla and Mount Pantano areas. In January, Arthur’s Regiment was involved in the attack against Monte Casino which anchored the German “Winter Line” defenses. This seemed like an impenetrable wall, which caused a long delay in Italy’s liberation, and resulted in thousands of casualties. The 135th Infantry landed at Anzio in March, an amphibious operation behind enemy lines, but against a well-entrenched enemy, again resulting in heavy casualties. The original landings occurred on January 22, 1944, but the fierce battle was not won until May 24th. After defeating the Germans in the Anzio area, the 5th Army, including Arthur’s 135th Regiment, swiftly moved north liberating Rome on June 4th. After a well deserved rest, the 135th moved through positions held by the 144th Regiment to the Cecina River. They crossed the river on in early July and encircled the heavily-defended town of Cecina. Private Arthur Pickell was killed in action on July 5, 1944. He is buried at the Florence American Cemetery, in Florence Italy.