Clarence W. Root was born in July, 1906 to John and Bertha Root who lived in Spring City, Pennsylvania. Clarence was one of six children.

Clarence completed the eighth grade and afterwards worked as an unskilled general woodworker.

Clarence enlisted in the Army on June 8, 1942. He received basic training at Fort Meade, Maryland, and was sent to the Ordnance Corps for training at Aberdeen. He was then transferred to Salt Lake City, Utah where he was promoted to the rank of Sergeant.

Clarence was transferred to Geiger Field, Washington for additional training, then to Murock Field, California, were he was promoted to the rank of Staff Sergeant.

Clarence was assigned to the 366th Bomb Squadron, 305th Bomb Group, which was training to fly B-17 Flying Fortress bombers. He was sent to Fort Dix, New Jersey, in preparation for deployment overseas, and was granted a furlough home. 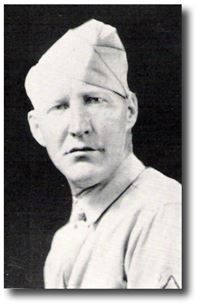 In September, his squadron deployed overseas to the European Theater of Operations as part of the 8th Air Force. The Commanding officer of his group was Colonel Curtis LeMay, who would rise up through the ranks as the General in charge of the Strategic Air Command (SAC) after World War II. Clarence’s Bomb Group was deployed to England, stationed at Grafton Underwood for two months until their new base at Chelveston was completed. Clarence’s responsibilities included supervising transferring bombs by trucks and trailers to waiting bombers. Staff Sergeant Clarence W. Root Died Non Battle in a motor vehicle accident on December 29, 1942. His parents received the government telegram on Friday January 1st. Clarence was buried at theCambridge American Cemetery in England.