John G. Tevis was born on January 15, 1925 in Phoenixville, Pennsylvania. John was one of nine children.

John attended two years at Phoenixville High School. He was a member of the Sacred Heart Church.

John entered service in the Army in June, 1943. He trained in Texas and Louisiana. He returned home on an 11-day furlough for the Christmas Holidays in 1943. He said, “Army life is swell, but home life is still better".

John was sent overseas to the Pacific Theater of Operations in June, 1944 assigned to the 287th Field Artillery Observation Battalion. The Field Artillery Observation battalions did not have artillery, but were trained to set up observation posts, and communications, for counter battery operations – countering enemy artillery.  This was done by sound and flash ranging (observe source of enemy artillery by sound and their flashes), to call in fire support and adjustments for accuracy. 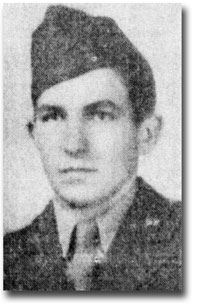 John was in combat in the Admiralty Islands off the northern coast of New Guinea, as well as on Leyte Island in the Philippines. He landed on Okinawa in May. Private First Class John G. Tevis was Killed In Action on May 5, 1945 on Okinawa. He was buried in a local military cemetery. In 1949, he was returned home. Services were held on February 9th, followed by a Solemn Requiem Mass at Sacred Heart. Interment was at the Sacred Heart Cemetery with full military honors. Soldiers from Company B, 111th Infantry served as pallbearers, and members of the American Legion served as color guards. The firing squad was from Valley Forge General Hospital.