Arthur Powell Thomas was born in 1916 in Phoenixville, Pennsylvania. He was the younger of two children. His father, Sidney, was killed n action in World War I.

Arthur graduated from Phoenixville High School in 1933. He was a member of the Central Lutheran Church and the Independent Order of Oddfellow Lodge, a social organization that strived to improve and elevate the character of man.

He obtained employment at the B.F Goodrich Company.

Arthur entered service in the Army in December, 1942. He trained for two years with antiaircraft artillery, including a three-month course at a Chicago electrical school.

In August 1944, Arthur married a nurse, Lois Bailey of Burlington, Iowa. The next month, he received infantry training at Camp Gordon, Georgia.

Arthur was sent overseas to England in January, 1945, then to France, serving with Patton’s Third Army, which was pushing across France into Germany. 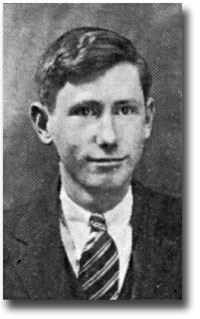 Private First Class Arthur Powell Thomas was killed in action on February 19, 1945 in Germany. Arthur was awarded the Purple Heart and was buried in the American Cemetery in Duchy, Luxembourg with military honors.  Memorial services where held on April 8th at the Central Lutheran Church. Double taps (taps with an echo by another trumpeter) were sounded.