Harvey R. Vanderslice Jr. was born on March 27, 1915 to Harvey and Olive Hannah Vanderslice of Coatesville, Pennsylvania. Harvey was the fourth of six children. His father was superintendent of the Coatesville School District until 1947, when he retired to become a professor at Ursinus College and to write a book on Pennsylvania History.

Harvey graduated from the Aliquippa High School and the Perkiomen College Preparatory School in Pennsburg. He then attended Penn State College where he studied the mineral industry.

Harvey enlisted in the Army Air Corps on September 3, 1941 as an aviation cadet. During his service, he married Helen Fuller from Williamsport.

Harvey received his wings as a pilot and commission as a Second Lieutenant at Selma, Alabama on April 27, 1942. He then received training flying B-24 Liberator four engine bombers.  Harvey was assigned to the 307th Bomb Group, 424th Bomb Squadron which was activated at Geiger Field, Washington in April 15, 1942. The Bomb Group then moved to Ephrata Army Base, Washington for further training through September. They transferred to Sioux City Army Air Base, Iowa before assembling in San Francisco for deployment overseas in the Pacific Theater of Operations in October. Harvey’s squadron was based in Hawaii (Mokaleia Field) through May, 1943. It was from Hawaii, that the 307th launched a mission against Wake Island on December 24 and 27th for which Harvey received an Air Medal awarded New Years Day at a ceremony at Hickman Field. As the 307th continued operations against the enemy, they moved their base to Espiritu Santo, New Hebrides, and flew missions from forward operations bases on Midway Island, Canton Island, and Guadalcanal. His parents received a letter dated February 10th, in which he wrote that he was in an active war zone, and seeing a lot of heavy action. Perhaps due to a premonition, he set forth certain arrangements in the event he did not survive. On February 12th, the 307th flew a strike from Canton Island against Shortland Harbor on Bougainville, the large heavily defended enemy base at the north end of the Solomon Islands. Harvey was the co-pilot; Howard G. McNeese was the pilot. During this mission, Harvey’s aircraft was shot down. The aircraft was on fire and went into a dive from over 12,000 feet. Harvey and Howard were able to pull out of the dive 100 feet about the sea, by shear physical strength wrestling the controls. The aircraft was so damaged that it soon crashed into the sea. His wife received notification that Harvey was listed as Missing In Action, somewhere in the South Pacific on March 3rd. She immediately forwarded the information via telegram to his parents. His father, grief stricken, immediately contacted the American Red Cross, to obtain more information. On March 15th his wife received a telegram from Harvey with the brief message “Safe and well, my thoughts are of you.” She immediately telephoned his parents with the good news. There was nothing in the telegram to indicate where it had come from, but it was relayed through San Francisco. As Harvey’s aircraft was going down, four crew members bailed out. The aircraft smashed into the water, and the remaining crew members (including Harvey) extricated themselves from the rapidly sinking aircraft. They were able to salvage a rubber life raft. They rowed in the open sea for 19 days and finally made it to land, where they were subsequently rescued. The crew members were transported to New Zealand for medical attention and recovery. Harvey sent letters home recounting his experience:

Our horrible crash occurred February 3rd. Our plane was shot down in action and believe me it was plenty of action. We were forced to make a water landing. I saw the handwriting on the wall. We fought our way out of the wreckage. Only then did we discover four crew members had bailed out. (What happened to them is not known.). We got on a life raft to paddle to shore. Our troubles were just beginning. In 19 days we covered 80 air miles, but actually rowed over 100 miles. On the twentieth day, March 8, we were finally rescued. I will never forget that date. The hardships hunger, nervous strain, exc., will never be known except to ourselves.

The past three weeks will be ones I will never forget. I can’t tell you too much about it now. We were shot down in action. However, with four others I spent twenty days on water and in the island jungles in enemy territory. It was rather rugged, hot days, cold nights, rain most of the time and nothing but coconuts to live on. We climbed the trees to get coconuts. We had a lot of rowing to do. There is much more to the story, but this is about all I can give now. I am well and in fine health. I lost a little weight, but I will get it back because I am now getting plenty to eat. I had an infected ankle last night but it is better this morning.

You will have to pardon the pencil for it is all I have and can not but a fountain pen here. I have been sent down here for a rest cure after our crash. Our orders read seven days but we are getting more. English money and the traffic are the two things that bother us most here. I guess I’ll really never know how lucky I have been. I am well and in good spirits as this horrible mess permits. Some of the things I have seen, I previously thought were nothing but fiction.

Harvey returned to duty. The 307th moved its base of operations to Guadalcanal in February 1943, New Georgia in January, 1944 and Mokerang Field, Los Negros in the Admiralty Islands in April. On June 2nd Harvey’s Bomb Group flew a mission against Truk in the Carolina Islands. Truk was the major Japanese naval base often referred to as the Japanese Pearl Harbor. On this mission attacking enemy fighters viciously attacked the 306th formation. One fighter staged a head on attack, hitting the nose of Harvey’s aircraft with 20 millimeter shells.  Harvey was hit and killed by these shells while flying the aircraft as co-pilot. The pilot was able to fly the heavily damaged aircraft back to base. Lieutenant Harvey R. Vanderslice was killed in action on June 2, 1944. His wife received the telegram that her husband was killed in action the evening of June 14th. She immediately contacted his father in Coatesville, who in turned called Olive, who was visiting a daughter in Chicago. Harvey was buried at a local cemetery. A memorial service was held on July 2, 1944 at the Coventry Church of the Brethren. It was there that Harvey spent his vacations and attended Sunday school and church.  Attendance at the service included a number of teachers from Coatesville. J. I. Hoffman, General Secretary of the Coatesville YMCA, gave the eulogy enumerated Harvey’s fine traits. (Mr. Hoffman was national known and respected as one of the founders of the YMCA movement in the United States. He also established the “Red Triangle” newsletter, including letters from our servicemen during World War II, and Korea. He also began the Fruit Cake program for serviceman, and visited their families. In addition to the Air Medal, Harvey received the Silver Star and Purple Heart, for the mission in which his aircraft was shot down. 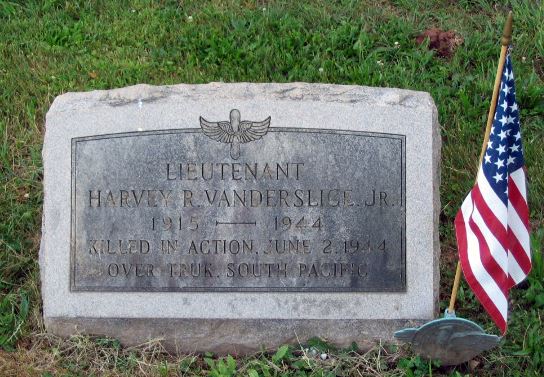 Just before his death, Harvey sent a copy of a poem to his wife, a poem that became a mantra for pilots during the war:

by John Gillespie Magee Jr. - A 19 year old American Pilot flying with the RCAF killed in action December 11, 1941         Oh, I have slipped the surly bonds of earth,
And danced the skies on laughter-silvered wings;
Sunward I’ve climbed and joined the tumbling mirth
Of Sun-split clouds – and done a hundred things
You have not dreamed of – wheeled and soared and swung
High in the sunlit silence, Hov’ring there.
I’ve chased the shouting wind along and flung
My eager craft through footless halls of air.

Up, up the long delirious, burning blue
I’ve topped the wind-swept heights with easy grace
Where never lark or even eagle flew:
And while with silent, lifting mind I’ve trod’

The high untrespassed sanctity of space,
Put out my hand and touched the face of God. After the war, Harvey’s remains were returned at the request of his family.   A family service was held at Coventry Church of the Brethren Cemeteryon June 25, 1948.