William Barthel was born on February 28, 1925 to Charles and Ruth Barthel who lived in Aldham, Pennsylvania. His father was a manager at a gas plant. William was the eighth of 11 children.

William entered service in the Marine Corps on April 29th, 1943. After training he was assigned to the 25th Marine Regiment, 4th Marine Division.

Private William Barthel was killed in action on March 11, 1945 on Iwo Jima. He is buried at the Honolulu Memorial Cemetery in Hawaii. 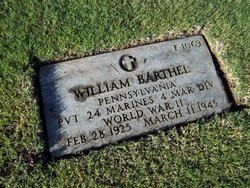