James attended Phoenixville High School. James was a member of the St. John’s Reformed Church. He was active in the Young Men’s Christian Endeavor both in his church, in which he served as president for one year, and in the North Branch of Chester County Society.   He obtained employment with the Pennsylvania Railroad.

James enlisted in the Marine Corps on June 2, 1942. After basic training, he was assigned to the 3rd Marine Division.

The 3rd Division was activated in September, 1942 at Camp Elliot, San Diego, California. They were shipped to Auckland, New Zealand in January, 1943. James’s division was sent to Guadalcanal in June for additional training. In November, they landed on Bougainville Island and endured costly and intense jungle warfare for the rest of the year. Bougainville Island is in the Northern Solomon’s, and at the time was part of the Australian territory of New Guinea. 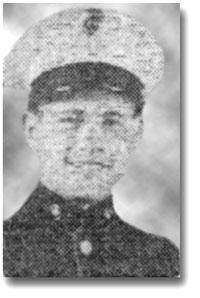 In January, 1944, the 3rd Division was relieved and returned to Guadalcanal for rest and further training. James’s division landed on the enemy occupied US territory island of Guam in the Marianas on July 21st. Corporal James E. Cruickshank was Killed In Action on July 22, 1944. A memorial service was held at St. John’s on September 17th. James was the first fatality of the 68 men in service on the church’s honor roll. Two letters were read honoring his service, including his participation in the attack on Bougainville (a very heavily defended island in the northern Solomon’s). The church’s pastor, Reverend A. A. Hartman, spoke on the theme, “they shall remember me in a foreign country”. Continuing their remembrance and honoring James during the evening service, Captain J. R. Norton spoke as an Army Chaplin. James is buried at the Honolulu Memorial Cemetery, in Hawaii.