Warren Taylor Garret Jr. was born on January 1, 1920 to Mr. and Mrs. Warren Garrett of  West Chester, Pennsylvania. He was one of two children. His father Warren Sr. was well known in the community. He operated a grocery store for several years in the borough of West Chestr. He was appointed Borough Health Officer, and was a lifetime member of the Thompson Masonic Lodge, and a member of the Fame Fire Company.

Warren Jr. attended West Chester High School. Warren was the Class Lieutenant of the Sophomore Class, Junior Class Vice President, and the Senior Class President.  Warren played football and was on the track team and the gym team. The yearbook says

Everyone knows Warren as the boy who is able to handle himself gracefully on the flying rings. He placed fourth in that event at Penn State this year. Although he has had tough luck in athletics in high school because of injuries, we know he will not be at a loss in S.T.C. gymnasium 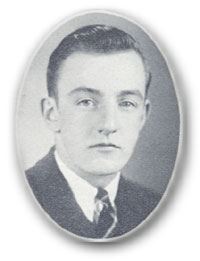 After graduation with the Class of 1937, he attended Pennsylvania State College. Warren married Florence Pratt of West Chester. Warren was drafted in December, 1944, although he chose to enlist in the Marine Corps. He received basic training at Paris Island, South Carolina. He was then sent overseas to the Pacific Theater of Operations in February, 1945. His parents received a letter written by Warren on board a ship on his way to Iwo Jima where he landed on February 23rd.   On the sixth day of battle Warren was involved in an intense night battle – his unit of less then 30 Marines suffered an attack by nearly five times their number.  Corporal Warren Taylor Garrett Jr. was Killed In Action on March 1, 1945. He is buried at the National Memorial Cemetery of the Pacific, Honolulu, Oahu, Hawaii. Marine Correspondent Staff Sergeant Harold A. Beard wrote about the battle in which Warren was killed:

It exacted a heavy toll from the small band of Third Division Marines, half of whom were either dead or wounded when relief arrived after daybreak. But they held their ground and also killed 63 Japs.

Marine assault troops had advanced over the terrain on the previous day, working over Jap-dug caves on a nearby ridge with demolition charges and flame throwers as they pushed forward to lines some 100 yards beyond. The mortarmen, keeping pace to lend supporting fire where needed, dug in their weapons on the slope. The scouts took up positions between the assault units and the mortar emplacements.

One hour before dawn an estimated 100 to 150 Japs crawled out of their supposedly neutralized system of tunnels and caves on the ridge and launched an attack on the mortars.  Four scouts in a observation post on the crest were the first to fall.

Corporal Garrett was in one of war photographer Joe Rosenthal's photographs. Joe took three photos of the flag raising at Iwo Jima, the first is the most famous. The third, with some 17 Marines around the raised and flying flag, which Joe thought would be considered the best of the three, includes Warren. The photograph was published in Look magazine in August 7, 1945.