Vernon Grant Rubincam was born on May 9, 1918, to Thomas and Katharine Grant Rubincam who lived in Coatesville, Pennsylvania. His father worked as a weight master in a steel mill.
Vernon was one of four children.

Vernon attended the S. Horace Scott High School in Coatesville. The high school yearbook describes Vernon as “Tall, quiet, handsome and soldierly".  Vernie’s personality touches the heart of all his classmates. An airplane will always attract his attention.  He is known for his scholastic ability. He is a fellow whose fidelity merits the highest praise.”

Harry Lackey remembers meeting Vernon at a local YMCA in a swimming program when they were 10. The walls of Vernon’s room were covered with posters of airplanes, and models of aircraft hung from the ceiling. They attended a YMCA camp together on the Chesapeake Bay one summer. They enjoyed many happy experiences.

Vernon received his pilot’s license at the Coatesville airport along with his friend, Herbert Hagamon. 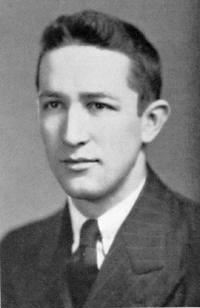 After high school graduation, Vernon went no to graduated from the Drexel Institute of Technology in Philadelphia with a Bachelor of Science Degree in Commerce . During his time at Drexel, he joined the Naval Reserve Officers training program.  On December 7, 1941 (Pearl Harbor), Vernon and his friends set aside their other responsibilities to help defend their country. Harry Lackey had a vision problem that prevented him from enlisting but he served on the home front making critical castings for the Manhattan Atomic Project while working at Luken's.
Vernon, John Grycky, Jim Latta and Herb Hagamon joined the Armed Forces. They called themselves the “Knights of the Square Table” because they were like knights going to defend their country, and they were going to “Square” things up. The “Knights” made a pact, that if any survived, they would attend to the families of the fallen.
Vernon enlisted in the Marine Corps and trained at Navy schools (Marine Aviators are trained by the Navy). Vernon returned home on leave after receiving his “wings” and commissioned as a Second Lieutenant at the Miami Naval Air Station in Florida. Shortly after, he left for the west coast for additional training and deployment. He was promoted to the rank of First Lieutenant.  Vernon was among the first Marine pilots stationed at Henderson Field, on Guadalcanal. The Marines landed on both Guadalcanal and at Tulagi on August 7, 1942, as “Operation Watchtower” (the first amphibious landings conducted by our Nation during the war, and the first since 1898). The Japanese were constructing an airfield, which at the southern most end of the Solomon Islands, would cut the supply routes to the North Eastern portion of Australia.  The Marines completed the construction of the airfield, naming it Henderson Field, in honor of Major Lofton Henderson, a Marine squadron Commander who had been lost during the battle of Midway. Vernon arrived on August 31st.  Henderson field was a dangerous place to fly from, let alone occupy. The Japanese constantly bombed, and strafed the field, as well as shelled it from the sea with everything from destroyers to battleships.The enemy continually fought to retake the airfield. Front lines sometimes overlooked or came to the very edge of the runway. The Japanese were constantly reinforced by the “Tokoyo Express” coming down the “slot” between the islands in the Solomon group.  Vernon flew Navy dive bombers from Henderson field. He flew Douglas SBD Dauntless. Vernon flew almost daily attacking Japanese cruisers and destroyers, many times without fighter escort, taking his chances against the daunting Japanese Zero fighters. “But, we did a lot of damage to the jap ships anyhow” he was quoted as saying.  After six weeks of intense flying and completing 30 combat missions, he earned a well deserved relief and returned to the states in April, 1943 for leave and additional training. He switched from dive bombers to torpedo bombers, training to fly the Grumman TBF Avengers. He returned to the Solomon Islands for his second tour of duty as a pilot and Executive Officer of a Marine torpedo bomber unit with a promotion to the rank of Captain.  After several months of flying, and completing more than 30 combat missions, Vernon received a well deserved furlough and on November 23, 1943 boarded a Navy transport aircraft for a flight to Australia. On the return flight, the transport never arrived. The transport, carrying Vernon and nearly 20 other pilots returning form a well deserved R&R, hit an island mountain. All were lost.  On November 30th his parents received a telegram, notifying them that Vernon was missing in action. A second telegram was received January 20th from Lt. General A. A. Vandergrift, L. General USMC, for the Commandant (Alexander A. Vandergrift was to become the 18th Marine Commandant serving from 1944-1947)  “…Deeply regret to inform that you son, Captain Vernon G. Rubincam, United States Marine Corps, is reported to have died in an airplane crash, instead of missing as previously reported. When information is received regarding remains you will be informed. Please accept my heartfelt sympathy.”   Shortly after receiving the latter telegram, they read an Associated Press story from the Solomon Islands, praising their son’s record as a dive bomber pilot. The story stated Vernon had at least 12 combat missions to his credit, attacking the Japanese at Kolombangara, Choiseul and Bougainville.  Captain Vernon G. Rubincam is honored on the Tablets of the Missing or Buried at Sea at the Punch Bowl National Cemetery in Honolulu, Hawaii.  Survivor of the “Knights of the Square Table”, Jim Latta, remembered their pact and attended to Vernon’s family as well as the families of heroes John Grycky and Herbert Hagamon. Every Mothers Day he brought flowers to Vernon’s mother until his death.  When planning for the high school's class of 1936’s 40th reunion, the class began "the Class of 1936 Memorial Scholarship to honor the four young men of that class who died in World War II (heroes Vernon, John, Herbert, and Harry Benard)". The scholarship is given to a graduating Coatesville High School senior for good citizenship.