David Alvin Stauffer, Jr. was born on June 22, 1922 to David and Ada Stauffer who lived in Berwyn, Pennsylvania. David was fourth born of seven children. David, who was known by his middle name "Alvin" was very active with his family in the Great Valley Baptist Church in Berwyn. Alvin was also a member of the Boy Scouts.

Alvin then attended the Tredyffrin-Easttown High School where he was very active in school in both sports and the arts. After graduation in June, Alvin enlisted in the Marine Corps on October 10, 1940. Following basic training he was assigned to the 5th Marines (Regiment) which were sent to Guantanamo, Cuba in April 1941. The 5th Marines were incorporated into the 1st Marine Division in February, 1941.

Alvin was sent to Quantico, Virginia in July, then Portsmouth, probably for advanced training. He was then sent to New River, North Carolina in September where the 5th Marines were garrisoned. 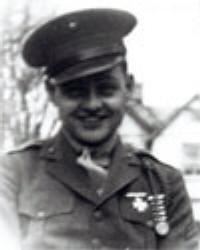 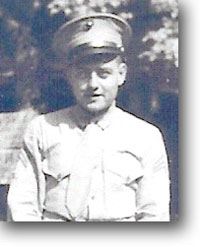 Alvin was promoted to Private First Class in January, 1942, then to Corporal and then to Sergeant in April. nOn May 16, 1942, Alvin was one of 4,700 Marines who boarded the transport USS Wakefield AP-21 for transportation to Wellington, New Zealand, arriving in June 14th. USS Wakefield  was the former cruise ship SS Manhattan the Queen of the United States Lines. It was on this ship that hero Coast Guard Seaman Daniel Norman Turner from St. Davids was killed when the ship was bombed at Keppel Harbor, Singapore, the previous January 29th. Alvin's regiment then embarked for the capture of Guadalcanal, landing on the islands on August 7, 1942.
Sergeant David Alvin Stauffer, Jr. was Killed In Action on August 13, 1942. His parents received a telegram notifying them that Alvin was Missing In Action as of September 4th.  Another telegram was received on August 18, 1943 signed by L. Holcombe, Lt. General United States Marine Corps:

An official declaration of presumptive death has been made in the case of our son, David. A. Stauffer, Jr., U. S. M. C.   Please accept my heartfelt sympathy.

The letter followed by a personal letter from the General which read in part:

It is a source of profound regret to me an to his comrades in the Marine Corps that your son Sergeant David Alvin Stauffer, Jr., U. S. M. C., lost his life in action against the enemies of his country and I wish to express my deepest sympathy to you and members of your family in your great loss. There is little I can say to lessen your grief, but it is my earnest hope that the knowledge of our son's splendid record in the service and the thoughts that he nobly gave his life in the performance of is duty, may in some measure comfort you in this sad hour.


His parents received the last letter from Alvin dated July 17th, acknowledging receipt of birthday gifts from the family. He said he could not say where he was, but he was not in combat and was having a good time. A letter from Captain  W. H. Whyte gave some details of  Alvin's death.

Colonel Goettage's division headed the patrol which left from Kirkum Beach (ed note: Kukum Beach)in a landing boat.   They landed according to their plan on the river (ed note: Lungga River)but the Japs had a cleverly concealed ambush there.   The fighting was very intense –the small patrol being attacked by a very large enemy force. Only two or three men managed to escape and then it was assured that the rest had been killed after putting up a terrific fight and killing many Japs.

This was considered one of the outstanding battles of the campaign. The men knew they were going in the enemy's stronghold and never faltered, although every man was a volunteer."

The family also received letters from Lieutenant Arthur and the Colonel Merritt A. Edison famed commander of the 1st Marine Raider Battalion and Medal of Honor recipient. Colonel Edison interviewed a survivor of the battle, who reported


"... he and Alvin were crawling forward together under heavy enemy machine gun fire when Alvin suddenly ceased moving and became inert. This man, Platoon Sergeant Charles C. Arndt, crawled over to Sergeant Stauffer, and spoke to him. Receiving no answer, he shook him and received no response. It is his opinion that he was killed in this first burst of fire and probably died immediately without pain or suffering."

David is remembered on the Tablets of the Missing at the Manila American Cemetery, in the Philippines.
Berwyn established a memorial (pictured above) of all those who served from the community, which was dedicated on Veteran’s Day 2006.  Located off of Lancaster Ave. near the train station, David’s name is engraved.