John Thomas Horshock was born November 12, 1924.  His parents, John  and Mary, settled in Coatesville. John was the oldest of three brothers.

John attended Coatesville High School where he excelled in sports. In his sophomore year John was elected class vice president. He was one of the most popular students of the class of 1942. He was known as a smooth dancer, a sharp dresser and was always smiling.

After the attack on Pearl Harbor on December 7th 1941, John and his best friend Charles Foy, left school to defend their country. They traveled to Philadelphia and enlisted in the Navy on January 20th, 1942. Both received basic training at Newport, Rhode Island. John received advanced training in communications at Boston. Both John and Charles Foy were assigned duty aboard USS Quincy CA39, a heavy cruiser of the New Orleans Class (sometimes referred to as the Astoria Class.)  Two other Chester-Countians were also on the ship: Tommy Vadine from Downingtown and Leff Yale from Nottingham. 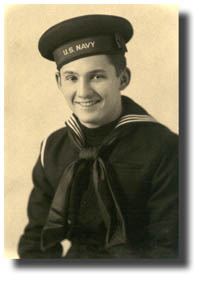 After leaving New York Harbor, USS Quincy transited through the Panama Canal to San Diego in June, then to the South Pacific as flagship of the cruiser force.  Quincy destroyed several Japanese installations during a bombardment, and then provided close fire support during the Marine Corps landing at Guadalcanal on August 7th 1942.  The night of August 8th, the Japanese Navy reacted to our landing on Guadalcanal and Tulagi, and sailed down “The Slot” (passage through the middle of the Solomon Islands).  Though forewarned, our cruiser – destroyer covering force was unprepared.  The two opposing forces were virtually equal, and this was the first major naval surface action against the Japanese Navy.  The result was the Battle of Savo Island, which was one of the worst defeats of our Navy.  USS Quincy and the cruisers USS Astoria, USS Vincennes as well as the Australian cruiser HMAS Canberra were sunk, with no losses to the Japanese The Quincy took the worst beating, “but in the opinion of the Japanese put up the best fight of any allied ship that night.”  Because of these losses and many more to come, the sound between Guadalcanal and Savo Island became referred to as “Iron Bottom Sound.”  Our Navy learned hard lessons and made changes, but at the high cost of lives. Seaman 2nd Class John Horshock was on duty in the CIC (Combat Information Center), BM2c (Boatswain Mate 2nd Class) Tommy Vadine was in 8 inch gun turret one, and Fireman 2nd Class Charles Foy has just returned from his watch in the fire room.  Because of the tropical heat, Charles went to the mess hall to sleep, rather then his hot quarters.  The attack came about 2 a.m. Charles rushed to General Quarters, John who was already on watch, served in the intense and critical communications room. Charles and Tommy survived the ships sinking, John, and Leff did not. (*See Survivor Notes) John’s family was notified that he was Missing In Action by telegram on September 16th. Upon hearing this tragic news, Coatesville High School dedicated their football team’s homecoming game on November 1st to John. Coatesville beat Overbrook 13 – 0.  The team presented the game ball to the family.  Kresges Five and Dime store on Main St. displayed a large portrait of John in their store window. On September 10th 1943, John’s family received a letter from the Secretary of the Navy Frank Knox, notifying them that John was Killed in Action. Coatesville High School dedicated their homecoming game on November 6th 1943 to John’s memory. They defeated Pottstown 27 to 0. John’s younger brother Ed played left end, and was co-captain of the team and received the game ball. John was awarded the Purple Heart, World War II Asiatic Pacific Campaign, Fleet American Defense, American Campaign medal.  A Memorial Marker was placed in a military cemetery in Manila, the Philippines.  St. Cecilia’s church held a Memorial Mass for John on September 18th 1943, and installed a marker in their cemetery. John’s brother Ed, served in the Navy during the War, and brother James “Duke” later served in the Air Force. Ed’s granddaughter Lorrie Jean seeking answers to their family loss, researched and wrote an exceptional report on the Battle of Savo Island while attending Bishop Shanahan.  John’s mother Mary - a WWII Gold Star Mother, spoke at the Hall of Heroes Dedication representing our World War II heroes. _________________________________