Malcolm Gardner Main was born on February 15, 1919 to William and Christine Main who lived in Harrisburg, Pennsylvania.  Malcolm was the youngest of three children. The family moved several times finally settling in Chester Springs, Pennsylvania.

Malcolm attended Pierson College, one of Yale’s 12 colleges, graduating 1941 with high honors. He majored in English holding a second rank standing for two years, and a third rank standing and oration appointment his Junior year.  Malcolm was a member of the Yale Political Union, and the Undergraduate Athletic Association.  According to Yale Yearbook, Malcolm planned to study law at the University of Pennsylvania after graduation.

Shortly after the attack on Pearl Harbor in December, 1941, Malcolm put his country before his educational plans and enlisted in the Navy. 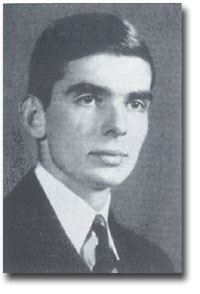 The carrier, Wasp, was struck by three torpedoes from the Japanese submarine I-19 on September 15th. She became a floating wreck and had to be sunk. The USS Juneau and escorting destroyers rescued 1,900 survivors. After returning the survivors, the ship continued to operate with TF 61 to protect and reinforce Guadalcanal. The Juneau participated in the battle of Santa Cruz Islands October 26-27, preventing a Japanese task force from reinforcing Guadalcanal. During this battle, two enemy carriers were extensively damaged. Despite the effective anti-aircraft fire of the ships - they shot down 20 out of 27 enemy aircraft - the carrier USS Hornet CV-8 was badly damaged and sunk the following day. The Juneau then joined the remaining carrier in the South Pacific – the USS Enterprise CV-6. She added her effective anti-aircraft fire to save the Enterprise, shooting down 18 attacking aircraft. The Juneau returned to Noumea, New Caledonia for replenishment and repairs.  In November 12-15, the Juneau participated in the Naval Battle of Guadalcanal as part of Task Force 67. The Japanese sent a large task force as an all out effort by the “Tokyo Express” to reinforce their forces on the island, and to destroy our naval forces in the area. The enemy task force numbered 18 ships, including two battleships, far exceeding the power of the Juneau’s cruiser destroyer task. The American task force patrolled “Iron Bottom Sound” off Guadalcanal, and successfully fought off attacking enemy planes, six of which wre taken down by the Juneau. Next came the onslaught of the heavy Japanese task force. During this ferocious battle the American forces fought the enemy to a standstill, and both forces retired to lick their wounds. During the melee, the Juneau was hit by a torpedo on the port side which caused a severe list, and she was down by the bow 12 feet. The ship kept going with only one propeller, at 13 knots. On the morning of  November 14th, the Japanese submarine I-26 fired three torpedoes at the Jeneau. She successfully avoided two, the third one hit close to where the previous torpedo had hit. The ship broke in two and quickly sunk. Of a crew of 820 men, roughly 115 survived. Malcom went down with the ship. This is the same ship on which the 5 Sullivan brothers, as well as hero Elwood Bickert, perished.