James F. McCormick was born in 1927 to Percy and Helen McCormick who lived in West Chester, Pennsylvania. His father was a World War I veteran. James was the only son of four children.

James graduated from St Agnes High School in 1946. He was well liked and respected by his fellow students, and a talented athlete. He was co-captain of the Varsity Basketball team his senior year.  The school yearbook describes him:

His quiet, unpretentious manner, and his ability to perform almost any task at any time have won for “Jim” the esteemed position that he enjoys in our class. When all is quiet, we can depend upon him to supply a spontaneously humorous comment, which springs from a light heart and a happy disposition. Since entering high school, his ability in basketball has bee unquestioned, and now he has an enviable position on the varsity. 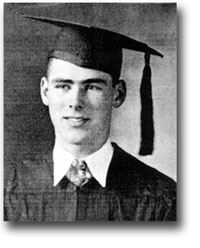 James was a member of the ship’s basketball team as well as the boxing team. After repairs and maintenance during the summer months in Norfolk, the Wisconsin sailed for South American waters, visiting Valparaiso, Chile, Callao, Peru, Balboa, Canal Zone, La Guajira, Venezuela, then returning to Norfolk in December.  Throughout the winter and spring of 1947, James’s ship served to train naval reservists, on a number of 2-week cruises out of Bayonne, New Jersey.  In June and July, the Wisconsin sailed to Northern European waters, with Naval Academy Midshipman, for their summer training cruise. In January, 1948, James’s ship joined the Atlantic Reserve Fleet at Norfolk, for inactivation. During the next several months James and the crew undertook the intense and difficult task of mothballing the Wisconsin. The ship was moved to a dry dock at Portsmouth Naval Shipyard. Around 9 a.m. on June 22nd, James slipped and fell down two decks and through an open hatchway onboard the ship. He was critically injured, and was immediately hospitalized at the Portsmouth Naval Hospital. His parents were notified of his injury an hour later, and his father Percy started for Portsmouth by automobile with his son-in-law James Pennell and James’ close friend Charles Frame, Jr.  They did not arrive until after 8 p.m., four hours after James had died. Seaman First Class James F. McCormick Died Non-Battle at 4 p.m. on June 22, 1948. The funeral was held on June 26th. Solemn Requiem Mass was held at St. Agnes’s Church later that morning, followed by interment at the St. Agnes Cemetery.