Lewis Henry Morrison was born on March 4th, 1924. His father Henry was a trolley driver for the Red Arrow West Chester to Philadelphia line, his mother Myrtle, was a laundress at the Chester County Hospital. His parents first met on the trolley. They married and lived in West Chester. Lewis was the oldest of three children.

Lewis, who was known as “Spike” to his family and friends, was a character from the day he was born. His mother had to constantly watch him. As a toddler he would escape from the backyard and go exploring the neighborhood, he especially loved exploring the local cemeteries. When he and his sister had tonsillitis, they were placed in beds next to each other in the Children’s ward at Chester County Hospital. Lewis created quite a commotion, he kept climbing out of bed to grab toys for his sisters and himself. 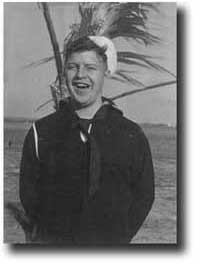 Lewis attended West Chester High School. He played varsity football, baseball, and won a medal in track. He was a member of the First Baptist Church in West Chester and became a newspaper delivery boy for the Daily Local News. Lewis was full of life, always laughing and joking, and was very popular, especially with the young ladies. However, because of the hard times, he left school in the 11th grade to help his family. He obtained employment with the Congoleum plant, Marcus Hook, which made floor coverings. In 1942, Lewis enlisted in the Navy, but during his physical discovered he had a hernia from an old football injury. Unknown to his mother, he had surgery in Kennett Square to repair it. He was then accepted in the Navy on October 8th, 1942. Lewis received basic training at Newport, Rhode Island, then advanced training at Willow Grove, as an Aviation Machinists Mate, 3rd Class. He was assigned to serve aboard the light carrier USS Princeton, CVL-23. The Princeton was one of nine Light Aircraft Carriers of the Independence Class, built upon Cruiser hulls (originally laid down as light cruisers of the Cleveland Class). The Princeton served in the Pacific Theater of Operations as flagship of Task Force 11 in their occupation of Baker Island, then joining Task Force 15 in for strikes against enemy held islands Bougainville, Rabaul and landings at Empress Augusta Bay, in the South Pacific. After a refit at Bremerton, Washington, the Princeton served as part of the main Pacific Fleet Strike Force-Task Force 38/58 (Known as Task Force 38 when commanded by Admiral Halsey, and Task Force 58 when commanded by Admiral Spruance.) The Princeton participated in the landings at Kwajalein, Majuro and Eniwetok, in the Marshall Islands. Lewis’s carrier then supported the landings at Saipan and Guam in the Marianas. The ship was involved in the Battle of the Philippine Sea (also know as the Great Marianas Turkey Shoot) in June, 1944, in which the ship destroyed 33 aircraft. The Princeton then launched strikes against Luzon in the Philippines, in October, as the US landed on Leyte Island. Leyte Island was where General Douglas McArthur, went ashore fulfilling his promise to the Philippine people when he broadcast, ‘I have returned’ to their great celebration. Around 10 am on October 24th, as single Japanese bomber emerged from the low cloud cover, and released one single large bomb which hit the Princeton, and crashed through 2 decks before it exploded. The crew fought valiantly, but could not save the ship. Lewis and 200 of his crewmates perished. Lewis was on the hanger deck, helping crewmembers change tires on some of the aircraft, 40 feet from where the bomb hit. Lewis' parents received a letter from his Commanding Officer, Captain William B. Buracker, in which he wrote,


Lewis was last seen at his battle station…where, as always, he was performing his duty in an excellent manner. He was a man who had the respect and love of all who worked with him.”  A fellow crewmate wrote, “All the fellows called him ‘Zemo’. I am glad to tell you how much we all liked him. He was a son to be proud of.”

Lewis was buried at sea, and is listed on the Tablets of the Missing at the Manila American Cemetery, Manila, Philippines.  A memorial service was held at the First Baptist Church on May 6, 1945. A Color Guard from the Bernhard Schlegel American Legion Post #134 rendered honors. The Church dedicated a gold star to Lewis, (it’s fourth) on the Churches Service Flag.