James Warren Phelps was born in 1916 to James and Rose Phelps who lived in Berwyn, Pennsylvania. He was the oldest of three children. James, who liked to be addressed by his middle name Warren, graduated from Tredyffrin High School in 1931. The yearbook records:

Warren may have been a late comer once in a while but when exams arrived he was on hand promptly with all the information needed for a high grade. Warren is one of many Senior boys who were initiated into the mysteries of dancing in his final year. He enjoyed them, too. Warren was on the yearbook staff his 4th year as art editor.

Warren joined the Army Air Corps and became a flight officer. He died in an aircraft accident in Cleveland, Ohio, in April 1940. 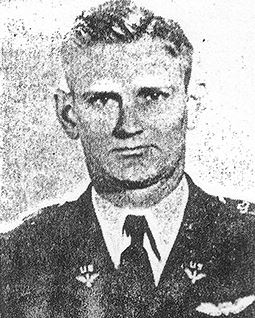 This biography is a sumation of over 10 years of researching. Warren Phelps is listed onthe memorial at the Berwyn train station and his name was given to us by the Berywn Historical Society, however they had no other information. He is not listed on any other WWII memorial, or WWII war dead or casualty list. We found James W. Phelps from Berwyn listed in the 1930 Census, which matches. Assuming he went by his middle name, instead of James. We found reference to a William H. Phelps of Green Hill, who had a son James W. Phelps of Berwyn and as well as a grandson LT J. W. Phelps who died in an airplane crash 4/11/1940 in Cleveland Ohio. Tredyffrin/Easttown Librarians helped by looking through numerous yearbooks until they found Warren Phelps. We also discovered Berywn did have a photo of Lt. Warren Phelps in uniform; however it is Not a Navy Uniform, but an early Army Aviation uniform.