Robert S. Weimer was born on October 18, 1922 to Walter Palmer Weimer and Lois W. Weimer of Downingtown, Pennsylvania. His father was a World War I veteran. Robert was the second oldest of four children.

Robert, who liked to be called ‘Bob’, attended Downingtown High School graduating in 1940. The yearbook says of Bob:

Full of pep, he is a “wiz”
Success in business will be his

After graduation, Robert worked for Collins and Aikman. The company converted to wartime production and made seat covers for airplanes, parachutes and flight jackets. 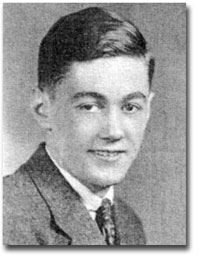 Bob enlisted in the Navy in September, 1942. After basic and advanced training as a fire controlman, he was assigned to the USS Fechteler DE-157, a destroyer escort of the Buckley Class. The Fechteler was launched in April, 1943 at the Norfolk Navy Yard, and commissioned July 1, 1943. Robert’s ship made two trips on the New York, West Indies – North Africa convoy route, as a part of the convoy escort. Then returning to New York and an overhaul, she took part in experimental antisubmarine exercises in Narragansett Bay. She then sailed to the Azores and Londonderry, North Ireland servicing as part of the convoy escort. In April, the Fechteler sailed from New York to Hampton Roads where she joined a convoy for Bizerte, Tunisia. Robert’s ship arrived on April 1st after surviving two days of heavy enemy air attacks. On her homeward bound voyage the Fechteler was attacked by the German Submarine U- 967 in the western Mediterranean. The German U-Boat fired a new homing torpedo at Robert’s ship. The torpedo struck and the Fechteler broke in two and sank. Twenty-nine crewmembers were killed; twenty-six were wounded. Survivors were rescued by a sister ship, the USS Laning (DE-159). Gene Lovegren RdM3/c, a crewmember of the USS Laning writes:

"I was aboard the USS Laning DE-159 when we were called to assist the torpedoed Flechteler off Oran early in the morning of 5 May 1944.  I had just been relieved from my Radar station duty at 0400 hrs. and went down to the main deck, starboard side location where a cargo net had been lowered over the side to receive the survivors.  We were picking up some of the ship's crew next to the sinking DE when U-967 returned to try to pick off another escort among us in the area and we were forced to leave the scene temporarily.  With help we drove off the marauding U-boat for good, and returned to finish our rescue mission by delivering the survivors to Gibraltar.

Time passed...and I watched the Fechteler, only to agonize with her as she finally pointed her bow skyward and slipped beneath the Mediterranean's surface.  A tormenting sight for a sailor to bear."

Fire Controlman 2nd Class Robert S. Weimer was Killed In Action on May 5, 1944.His parents received a telegram from the Navy Department on May 10th that Robert was Missing In Action. They received a letter from one of Robert’s shipmates in July informing them that Robert was killed in the torpedo attack. Later they received the official telegram from the Navy informing them that Robert was Killed In Action. Robert was awarded the Purple Heart with Oak Leaf Cluster, and is remembered on the Tablets of the Missing in Action at the Cambridge American Cemetery in Cambridge, England.