Leff Yale was born on December 7th, 1923 and grew up on the family farm in Calvert Maryland, which at that time had a Nottingham, Pennsylvania mailing address.  Leff was the third of nine children.

Leff enlisted in the Navy in 1940 with his parent’s permission. He received basic training at Great Lakes, and was assigned to USS Quincy CA- 39, a heavy cruiser of the New Orleans Class (sometimes referred to as the Astoria Class.) Three other Chester Countians were also on the ship: John Horshock and Charles Foy from Coatesville, and Tommy Vadine from Downingtown. In such a large ship and such a short time they never met Leff.

After leaving New York Harbor, USS Quincy transited through the Panama Canal to San Diego in June, then to the South Pacific as flagship of the cruiser force.  Quincy destroyed several Japanese installations during a bombardment, and then provided close fire support during the Marine Corps landing at Guadalcanal on August 7, 1942.

The Japanese Navy reacted to our landing on Guadalcanal and Tulagi, on August 8th, and sailed down “The Slot” (passage through the middle of the Solomon Islands).  Though forewarned, our cruiser – destroyer covering force was unprepared.  The two opposing forces were virtually equal and this was the first major naval surface action against the Japanese Navy.  The result was the Battle of Savo Island, which began shortly after midnight on August 9th and which became one of the worst defeats for our Navy.  USS Quincy and the cruisers USS Astoria, USS Vincennes as well as the Australian cruiser HMAS Canberra were sunk, with no losses to the Japanese.  The Quincy took the worst beating, “but in the opinion of the Japanese put up the best fight of any allied ship that night.” Because of these losses and many more to come, the sound between Guadalcanal and Savo Island became referred to as “Iron Bottom Sound.”  Our Navy learned hard lessons and made changes, but at the high cost of many lives.

Leff was officially listed as Missing in Action October 3, 1942 and later the designation was changed to “Killed in Action.”  Leff’s body was not recovered.  A memorial marker was placed in a military cemetery in Manila, Philippines. 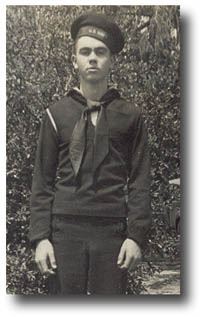