George J. Bacher was born in 1916 in Delaware. George attended three years of high school and then worked as a mechanic. In 1940 his residence was listed as Coatesville, Pennsylvania.

George was a Staff Sergeant with the 489th Bomb Squadron, 340th Bomb Group (Medium) flying twin engine B-25 “Mitchell” bombers. His squadron and Bomb Groups were part of the 12th Air Force.

The 489th Bomb Squadron was sent overseas Tunisia, North Africa beginning combat missions in April, 1943. As the Allies advanced, the squadron’s base moved forward to Sicily. In 1944 the 340th Bomb Group moved to Alesan, Air Field in Corsica France. George was a part of the ground crew who lived in tents close to the aircraft as they were constantly repairing and maintaining them. 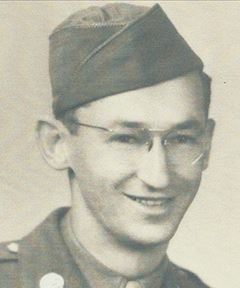 On May 13th, the Germans staged a surprise air attack on the base in a fading moon in the early morning hours led by an apparently captured British Bristol Beaufighter light bomber. The aircrew and staff had only slit trenches for protection. The German Air Force bombing lasted for over an hour, causing heavy casualties and damaging and destroying many of the squadrons’ aircraft and equipment. Thirteen died in the attack from the 489th Squadron. Of the 90 aircraft of the Bomb Group, nearly 75 were put out of action. Staff Sergeant George J. Bacher Jr. was Killed In Action on May 13, 1944. Mark C. Bacher his cousin records on the WWII Memorial:

He died in Corsica May, 1944, after the air raid on his allied airfield. Received shrapnel in his abdomen and died of internal bleeding. Denied himself medical treatment in order that others ‘more seriously hurt’ could be looked after.

He is buried at the Sicily-Rome American Cemetery, in Italy. George was survived by his aunt Marie K. Bacher from Wilmington, who received his Purple Heart. Delaware State Memorial Plaza at the base of the Delaware Memorial Bridge, honors veterans from Delaware and includes George Bacher.