Robert D. Clements was born March 11, 1925 to Howard and Ethel Clements who resided in West Brandywine Township Pennsylvania. Robert was the second youngest of eight children.

Robert attended local schools and enlisted in the Army at the outbreak of World War II. He was assigned to Company B, of the 323rd Medical Battalion and was stationed at Camp Rucker, Alabama, before shipping overseas to serve in the South Pacific.

Robert was discharged from the Army in 1948. He was called into the Army Reserves in 1950. In 1951, he reenlisted for six years.
Robert married Betty Dooley before he shipped overseas to Korea. They would have two daughters, Susan and Davine.

In Korea, Robert served as Sergean of the Guards for the military police at the 171st Evacuation Hospital in Tajon, Korea.  The unit was a 400 bed mobile hospital. While on duty, he attempted to arrest a suspect in a stabbing and was fatally wounded on February 1, 1953. Robert's wife, Betty received the dreaded telegram a few days later.  Both of his daughters were under the age of two at the time of his death. 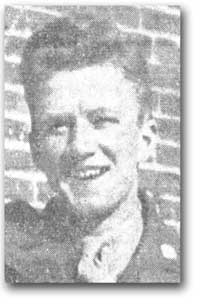 Services were held in West Chester on  April 11, 1953. Rober was buried with full military honors at Greenmount Cemetery in West Chester. Robert's brother, Raymond served in the Navy and his brother George served in the Army in the South Pacific during World War II. George also served during the Korean War.