Raymond McLaughlin was the son of Eli McLaughlin, Sr., of New Centerville. He was one of 12 children, of which four brothers served in World War II.  Another brother, Pvt. Eli McLaughlin, Jr., one time football and basketball star of Tredyffrin-Easttown High School, was stationed at the US Air Corps at Muroc Air Field, California, at the time of Raymond’s death.  Another brother, Herbert, 41, was a patient at the Bethesda Naval Hospital at the time of his brother's death,where he had been hospitalized since being wounded on a carrier near Iwo Jima in March, 1945.

Pvt. McLaughlin enlisted in the Army in the field artillery on June 1, 1948. His father said that Raymond left his New England training camp on August 6, and he did not hear from him again until he arrived at the West Coast sometime later. Raymond told his father in a letter written from a battle line 20 miles south of Traegu, Korea, on August 30, 1950, “Don’t worry about me, I’ll be all right.  I’m with the First Cavalry Division and only a short distance from the front.”

Raymond McLaughlin died in action at only 20 years of age on Sept. 8, 1950, just 13 days after he landed at Pusan in southern Korea. He was the first Upper Main Line soldier to pay the supreme sacrifice in the Korean War.

Military services were held on July 20, 1951 at the Towson Funeral Home in  Downingtown. Interment was with full miltary honors at the Hopewell Cemetery. 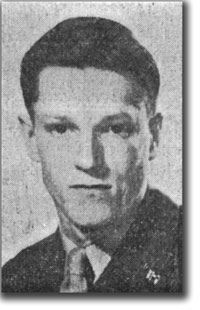