Emerson Earl Heller was born on July 24, 1926 to William and Martha Heller who lived in East Vincent Township, Chester County. Emerson was one of four children.

Emerson graduated from Spring City High School in 1941. He attended Ursinus College, but left to enlist.

Emerson received training as a B-17 bomber pilot at Roswell Air Force base in Georgia. He was then sent to England in late 1944 and requested assignment to the 359th Squadron of the 303rd ‘Hell’s Bomb Group Angels” – the same squadron as his brother, Major William Heller. The 359th was stationed at Molesworth, England. Emerson was a copilot of a B-17 piloted by Marvin G. Richeson. His first combat mission – the group’s 309th mission - was on February 9, 1945 against Siegen, Germany. His last combat mission was on April 20, 1945, against Treunbrietzen, Germany. He flew a total of 31 missions.

After his tour of duty in Europe, Emerson returned stateside and was discharged from the service in November, 1945. He then enlisted in the reserves.

Emerson was called back to service in August, 1947 as part of the newly formed Air Force. (The Army Air Corps became the Air Force on September 17, 1947 under the National Security Act of 1947). Emerson served several tours of duty including the 203rd Air Force Base Unit Fairchild in Spokane, Washington and at the Ramey Air Force Base in Puerto Rico. 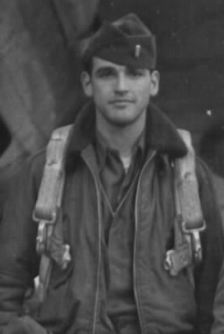 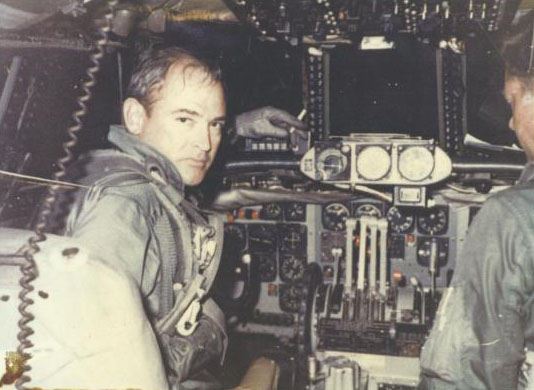 Emerson received training to fly B-29’s but became very interested in air sea rescue. He believed the newly developing helicopter would become an essential element for air sea rescues. The first prototype rotor wing aircraft were developed in the early 1940’s by Igor Sikorsky. For more information on the history of the helicopter, visit the American Helicopter Museum and Education Center. Emerson served two tours of duty in the Korean War -1951-1952, and 1955-1956. In his first tour of duty he was the Commander Detachment 1, 3rd ARS (Air Sea Rescue) headquartered in Yong Dong Po (later redesignated as the 2157th Air Rescue Squadron). According to an article in the Stars and Stripes:

In May, 1952 Emerson staged a daring rescue of a Marine pilot who was flying an F4U Corsair shot down by enemy fire. The pilot was floating the icy ocean off North Korea. A seaplane attempted to rescue him but could not land because of 15 foot waves and accumulating sea ice. Emerson, flying a Sikorsky H-5 helicopter, flew out to rescue the pilot. The pilot’s hands were so numb he could not grab the hoist cable. The helicopter pilot, Major Emerson E. Heller, Spring City, Pa, decided to try one of the boldest attempts of his flying career by violently maneuvering his copter, he managed to wrap the hoist cable around the downed pilot in such a manner that Truxbury could hold on. The technique worked and the Marine pilot was hoisted in the helicopter. It was Heller’s second pickup within a four day span.

In Emerson’s second tour of duty during the Korean War, he was stationed in Japan as Commander Detachment 1 for two years. While there, he led an effort to help their Korean houseboy attend college, raising nearly all of the funding for his tuition. After Korea, Emerson spent two years at McClellan Air Force Base. He then served as Commanding Officer for a radar station at Neah Bay, Washington, and then as a squadron Commander at McCord Air Force Base in Seattle. He also served as the commander of a flight service squadron at Torrejon Air Force Base in Madrid, Spain from 1963-1966. When Emerson returned stateside he received his final assignment as a pilot in the 554th “Batcats” Reconnaissance Squadron. The 554th was one of two squadrons of the 553rd Reconnaissance Wing based at the Korat Royal Thai Air Force Base from 1967 to 1971. They flew EC-121R Warning Star Aircraft. These were military conversions of the Lockheed Super Constellation Air liner, flown by both the Air Force and Navy, and were intelligence gathering as well as used for airborne early warning system, part of the DEW (Distant Early Warning) line. 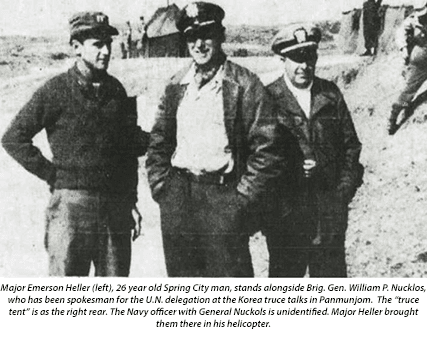 During his what  was to be his final combat flight before retiring, Colonel Emerson E. Heller was killed in action on April 25, 1969 when his aircraft crashed in Thailand.  Fellow airman, Mike Burroughs, posted “The Crash of 21493 in September 28, 2002” on the Arlington Cemetery site:

“The results of the accident investigation determined that when the aircraft took off, the severe weather forced it down, and it never gained more than a few hundred feet in altitude. The aircraft, tail number 21493, had made a pretty good belly landing, but as it began to hit trees, it broke up, and with a full load of fuel, it caught fire and exploded. Although I never saw any of the wreckage, I got some descriptions from investigating officers, and it was horrible. Those guys never had a chance. The crash was attributed to pilot error, as the technical manual specified that when thunderstorms were within five miles of the airfield, takeoffs and landings would not be attempted. Two questions that have plagued me for 30 years are (1) why the aircraft commander requested permission to take off in such severe weather, and (2) why the air traffic controller did not recommend that he delay takeoff until the storm had passed. There was some speculation that since aircraft commanders were under so much pressure to be on station on time, Colonel Heller decided to go ahead and take off and be done with it.”

Lt. Col. Emerson E. Heller was my Commanding Officer at the USAFE Madrid Flight Service Detachment, Madrid, Spain, 1963-1966. We were a small organization of about 20 Officers and Airmen. He was very kind to a young Airman who at 18 was experiencing all the aspects of life first hand in a great city. More than once he had a fatherly talk with me and explained the error of my young ways and for this I will always be grateful. Three years latter when I was enroute to my new base in Korat, Thailand to be aircrew with the 553rd Recon Wing “Batcat’s”, Lt.Col. Heller was working in the 553rd Command Post and saw my name on the newcomers’ roster and was able to get hold of me in Jungle School in the Philippines. It was a great surprise to hear from him as he explained he was going on his last flight before retirement after thirty years of service in a few days. He said according to the schedule I would be coming in and I could join him on that last flight and I said I looked forward to it. As life will have it, I didn’t get out of Bangkok as planned and I reached Korat on the day he and his crew perished on take off. If we had then all the technology we have now he would have known about micro burst and other weather phenomena. For me that was a great loss to have lost a close friend along with so many other great Americans. Then a few months later my Crew 40 crashed and I lost more great friends. War is Hell!!! May God bless them all.

Emerson received a number of medals over his long career in the service: Emerson was buried at Arlington National Cemetery. He was survived by his wife, Theresa, daughter Rande and son Eric.