Richard Vaughn Myers was born on February 13, 1947 to Ralf and Violet Myers who lived in Glenmore, Pennsylvania. His father worked locally as a butcher. Richard was one of five children.

A childhood neighbor who grew up with Richard reflects:


"….my earliest memory is before we started first grade. We sledded and ice skated in the winter, and played baseball and tag, hide and go seek, Mother May I, Red Rover, cowboys, climbed trees, worked in the local orchard picking apples for 10 cents a basket and fished in the creek behind our house. I remember Richard rode a horse occasionally. I remember that Richard was always a loyal friend..."

Richard graduated from Downingtown High School in 1965.  Richard, whose nickname was “Bearcat”, was in the Lettermen’s Club and the electronics club in high school. He was also on the football and wrestling teams, and was the baseball manager in his freshman year.

Richard dated Kathy, who graduated in 1966, and later became engaged. He worked as a butcher at the Devault Packing Company after graduation. 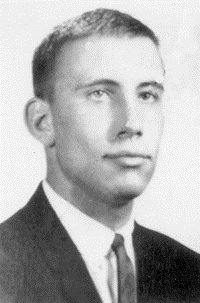 Richard enlisted in the Army, and after training, he was sent to Vietnam in July 1967. On 13 November 1967, Specialist Four Richard Vaughn Myers was serving with 39th Infantry Platoon (Scout Dog), 173rd Airborne Brigade, in Kontum Province, South Vietnam. On that day, SPC4 Myers was killed in action when he sustained multiple fragmentation wounds. His body was recovered.  Richard was awarded the following medals: Richard V Myers is remembered on the  is located on the Vietnam Veterans Memorial Wall, Panel 29E Line 91. Richard is buried at Hephzibah Baptist Church Cemetery in Coatesville, Pennsylvania. A story featured in the Daily Local News in June 15, 1989, titled “20 years later she searches for dad”, highlighted Richard's  daughter, Billie’s search to learn about the father she never knew. She contacted Richard’s mother who shared his letters home. Through the letters, Billie learned that her father did not enlist to escape the responsibilities of home. He often asked about his baby daughter and had his parents buy presents for her in his absence. Billie stated: “I didn’t realize how much the letters would affect me - seeing his handwriting is almost like communicating with my dad.”… “I  read one or two of the letters, then I sat on the couch and cried my eyes out. In reading the letters I realized my dad was a kid. he would be writing letters home, talking about his buddies being killed and the next paragraph would say, ‘So, how’s the Downingtown football team doing?’  That’s when I began thinking of what I could do to keep his memory alive.” The newspaper article shared one of Richard's letters home:

“I would have written sooner but we been kinda busy fighting Charlie. This morning we pulled back to re-supply and we are going back in this afternoon. We had quite a few many wounded but only a couple KIA. I don’t want you to worry about me because God is with me. There are so many times God has saved my life that I could ever tell you about them all.

On the tenth I got a chance to go to church. I took communion for the first time and I feel a lot closer to the Lord. Of course church wasn’t too much like home but it meant more to me then going to church anywhere ever has. I really don’t have much time to write so this will have to do for now.  Keep you letters coming. Tell everybody I said hi. Love Rich.” 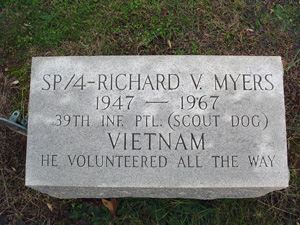