Donald Russell Burton was born to Lionel and Sybil Burton on July 17, 1939 in Coatesville, Pennsylvania. During his youth, his Uncle, Beverly Burton, who was the Police Chief of South Coatesville, was a major influence in his life.

During his high school days Donald enjoyed participating with his team in track and field events - his specialties were running and pole vaulting. He graduated from Scott High School in Coatesville in 1959. After graduation he was employed by Embreeville State Hospital.

Don soon made a decision to enlist and become a member of the Marine Corps and entered service in August, 1961. In October, 1963 he married Ruby Koon. After fulfilling his initial 4-year enlistment he decided to re-enlist and make the Corps his career. He served at several state-side Marine installations including the Naval Base at Annapolis, MD.

Not long after re-enlisting he received orders to report to Vietnam in November, 1965 where he was assigned to Company B, 1st Battalion, 3rd Marine Regiment, 3rd Marine Division which was headquartered in Da Nang. Prior to his actual deployment to Vietnam he and his wife, Ruby, became the parents of a son, Donald Russell Burton, Jr,. on 5 September, 1965. Don was unable to see his new son before deployment. 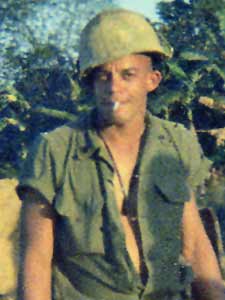 Don was well suited to the Marine Corps life and was promoted rapidly through the ranks because of his personality and leadership abilities. Don was now Sergeant Burton. Operation ORANGE was planned by the 3rd Marine Division HQ in late March, 1966 and involved many Marine units in the I Corps Tactical Zone (Vietnam). The Operations Order for the event spans nearly 100 pages and details the objectives and desired day-to-day expectations for each unit. Several companies of 1st Battalion, 3rd Marines were slated to participate including Sgt. Burton's Company B. It began as planned on April 1 and terminated on April 11. The mission was to conduct a "search and destroy" operation in the areas north and south of the Vu Gia River approximately 20 miles inland from the coastal city of Hoi An to support the initial installation of a CIDG Camp (Vietnamese Civilian Irregular Defense Group led by Army Special Forces to train the local villagers) and to provide mine clearing and security for the area. This area was a fertile river valley at the foot of densely wooded hills; some in excess of 500 meters high. The hills surrounded the area of operation to its north, south and west. The flatlands at the base of the hills where the Song Vu Gia flowed were filled with rice paddies and produced massive amounts of that staple each year... a logical area for the enemy forces to set-up camps as they passed-through. The first day of the operation, 1 April, the initial troops were airlifted to their objectives and encountered some, but light, enemy resistance. On 2 April Sgt. Burton's unit arrived at its objective by helicopter and, almost immediately, enemy resistance increased. Skirmishes and heavy fighting broke-out throughout the area of operations as additional Marine units joined the fight. Numerous fortified enemy bunkers, caves, rice caches and fighting positions were destroyed by the Marine ground troops, air support and artillery. Hostile forces were far more numerous than those estimated in the original Operations Order. Sgt. Burton lost his life on 2 April 1966 while leading his troops against a larger body of heavily armed and entrenched enemy forces near the village of Ngoc Kinh in the Song Vu Gia valley. The After-Action Report from the 1st Battalion, 3rd Marines enumerates the losses for Company B on 2 April, 1966. Those from Sgt. Burtons's Company (and attached personnel) follow: Overall, the Marine units involved in Operation ORANGE suffered 18 KIA and 91 WIA during that 11-day period. Enemy KIA were reported at 82.  In late April, 1966 Sergeant Burton's remains were reunited with his family and he was buried at New Evergreen Cemetery in Hayti, Pennsylvanis. His name, and those others who gave their lives in our defense during Operation ORANGE, may be visited at the Vietnam Veterans Memorial and viewed on Panel 06 East. Sgt. Burton's inscription is on Line 74 of that panel. 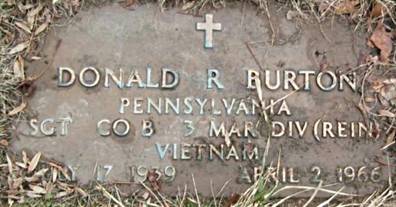