David Bahus was born in 1923 and resided in Phoenixville. David had three brothers that also served: Cpl. Joseph Bahus, who served in the Pacific; Pvt. Andrew Bahus at Carlisle Barracks, PA; Carl Bahus in the European Theater of Operations. He also had a step-brother, Cpl. Joseph Toth, who served in England.

David enlisted in the Army on July 23, 1942, and received basic training at Camp Mackall, NC. David volunteered for paratrooper training and was trained in Fort Benning, GA. He was assigned to Company A, 2nd Battalion, 506th Parachute Infantry Regiment. (see photo below). David qualified for parachute wings after his fifth jump, at 19 years old.. In June 1943, the 506th PIR was attached to the 101st Airborne Division. The entire division embarked on two ships leaving New York Harbor on September 5th for transport to England on board the SS Samaria, a Cunard Line Ocean liner converted to a troop ship. A Company spent the next nine months training for D-Day in the village of Aldbone, Wilshire, England. 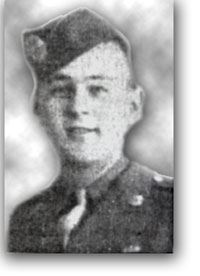 The 101st (and 82nd) Airborne division was assigned to participate in the liberation of Europe– code named “Overlord”. David’s division was to parachute at night behind “Utah” beach in Normandy, an integral part of the Overlord plans, code named “Operation Chicago”. They were to secure the beach exits and prevent German reinforcements from arriving. The 506th PIR objective was to secure the two southern beach exits on the Coutentin Peninsula. 1st Battalion was was to take Pouppeville, and secure Utah Beach Exit #1. 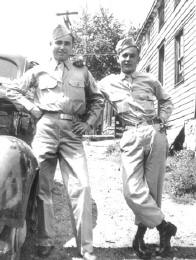 On the early morning hours of June 6, 1944, David embarked with his squad on a C-47 transport aircraft for D-Day. Because of the weight of the equipment they wore (often 100 lbs), each man had to be helped aboard the transport. The aircraft left the field just after midnight to head for France. Low clouds and devastating anti-aircraft fire damaged or destroyed a number of the aircraft causing the  huge formation to break and many of the aircraft went off course. Many of the men missed their targets when they jumped. Of the 81 transports carrying the 506th into battle, only 10 dropped on their targeted area. Most of David's battalion were on those 10 aircraft. The story of their heroic success is well documented. David’s unit, despite heavy casualties, continued to advance and to liberate France.

In September, David’s unit was involved in Operation Market Garden, a massive parachute jump into the Netherlands to capture bridges into Germany. The concept was to parachute deep behind enemy lines in France and run around the flanks of the heavily defended German lines. This operation was conceived by British Field Marshall Montgomery as an attempt to shorten the war. However, the operation was a complete failure as the bridges were too far from the supply lanes and infantry could not break through to the bridges. The movie “A Bridge Too Far” describes a portion of this operation. It was during this operation that David was injured during a jump. He was hospitalized in France and returned to duty on October 4, 1944.
On December 16, 1944, the Germans mounted a massive offensive driving deep into the thinly-spread allied lines in an attempt to split and encircle allied forces - more comonly known as the Battle of the Bulge. Bastogne, Belgium was a strategic crossroad town that had to be held by the Allies at all costs. The 101st Airborne was rushed in to reinforce the city before it was surrounded. On December 18th, David’s battalion embarked on a 100+ mile transport in 13 trucks, with 50 men per truck, to Bastogne, arriving just before dawn. They were rushed into battle with minimal ammunition and no cold weather clothing during one of the coldest winters in years. David’s battalion was assigned the job of reinforcing the nearby town of Noville, which commanded a major road to Bastogne. Noville was held by elements of a surrounded armor unit, holding against an onslaught of heavy German armor and infantry. They held the city for two days of intense combat, and were ordered to withdrawal back to Bastogne when it became obvious they could not hold against the massive assaults. During that battle, David was wounded - probably by artillery fire. According to the Battalion official report,“It was impossible to take care of all the wounded in the two aid stations. Our medical officer and several of the aid men were badly wounded.” Sergeant David Bahus died of his wounds on December 26, 1944 in Belgium. On January 14, 1945, his mother received a telegram stating David, “died of wounds inflicted in a battle in France.” David was initially interred in a temporary military cemetery, but his remains were returned home aboard the USS Barney Kirschaum in 1949.  David was interred at Morris Cemetery with full military honors.