Stephen Brooks was born on February 14, 1920 to Paul and Helen Brooks who lived in Easttown Township, Pennsylvania. Stephen was the youngest of three children. His father was born in France, his mother in Colorado.

Stephen graduated from Haverford School and the attended Harvard University1938-1942. His brother, Phillip graduated  from Harvard in1939.

Stephen entered service in the Army Air Corps in December, 1942. After basic training, he was commissioned and stationed at Myrtle Beach Bomb Training school. He was then sent overseas to North Africa and was assigned to the 95th Air Depot Repair Squadron as an engineer and supply officer.

Second Lieutenant Stephen Brooks Died Non-Battle on December 2, 1944 in Heliopolis Egypt. He died from injuries received when and armored truck in which he was riding was sideswiped by another vehicle. He was survived by his wife, Bonnie Babcock Brooks, and then 16 month old son, Christopher. 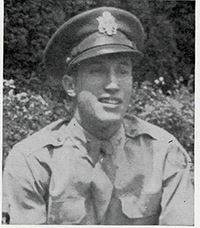