Roland E. Bullock was born in August 29,1909 and lived in Kelton, Pennsylvania. He was one of three children. His parents operated a general store. Roland graduated from Kennett High School and then attended Washington College.

After graduation, Roland obtained employment with Dupont Company. He married Edna Lynch of West Grove on December 21, 1941. Roland moved to Wilmington to start his family. It was there that their daughter Helen Ann was born.

Roland joined the Army to defend his country on May 10, 1943. Although residing in Wilmington, he joined from his home community so he would train with the local contingent. He received basic training at Camp Shelby, Mississippi. In May,1944 he was sent to England for further training, joining the 314th Infantry Regiment of the 70th division  - known as the Division of the Cross of Lorraine. 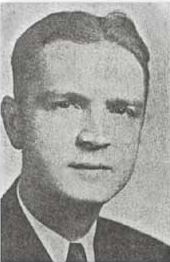 Roland’s Regiment landed on D-Day in Normandy on Utah Beach. The regiment was involved with the capture of Cherbourg, on June 26th. After the ‘breakout’ from the Cherbourg Peninsula, the regiment fought its way across France, arriving in the Lorraine area of North Western France, near the border with Germany in early September, 1944. The battle for Foret De Parroy began to drive the Germans out of the Loraine; ironically the same general area for which its division was named for its heroic battles in WW I. It was during this hard fought battle that PFC Roland Bullock lost his life.  His wife received the fateful telegram that Roland was Killed In Action on October 10th. The company Chaplain advised them that Roland was a good soldier, and was held in high esteem by all who knew him. He said Roland suffered little, and was buried with full military honors, with last rites, at an American Cemetery in Andilly, France.*  His remains were brought home in May, 1949 for burial in his home country. Funeral services were held on May 6th in Avondale. He was buried with full military honors at the New London Cemetery. The William W. Fahey Post 491 American Legion rendered full military honors.

At the end of the war, the American Cemetery at Andilly, France was used exclusively for German casualties. The remains of American soldiers initially buried at that site were either sent home or moved to the Lorraine American Cemetery and Memorial at St. Avold, France.