Allan B. Eadline was born in 1925 to George and Avis Eadline who lived in Phoenixville, Pennsylvania. He was the youngest of four children. The family moved to Collingswood, New Jersey, while Allan remained in Phoenixville studying to become a master machinist.

He enlisted in the Army in September, 1942 and received training at Fort Eustance, Virginia for the Coast Artillery, and was later transferred to the Infantry.

Allan served in the 182nd Infantry Regiment, Americal Division. The Americal Division - one of only two unnumbered divisions in our Army - the other was the Philippine Division. As such, units, sometimes even battalions, were frequently joined with other units, producing much difficulty in following the battle history of the 182nd Regiment.

Private Allan B. Eadline was Killed in Action on February 28, 1945. According to a telegram received by his parents, Allan was killed on Leyte Island, Philippines. He is buried at the Manila American Cemetery, at Fort Bonifacio, Manila, Philippines.

His brother, Lloyd, a P-51 pilot with the 78th Fighter Group, was Killed In Action on February 24, 1945 over the Netherlands. His brother George G. served in the Army Signal Corps. 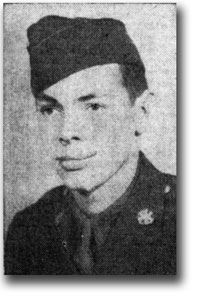