Robert C. Edwards was born on August 31, 1923 in Phoenixville, Pennsylvania. He had two sisters.

Robert graduated from Phoenixville High School in 1941. After school, he worked at the Phoenixville Iron Company with his father. He was a member of the St. John’s Lutheran Church and the Veterans of Foreign Wars drum and bugle corps in Norristown.

Robert was called into service in the Army on March 15th. He received training at Camp Butner, North Carolina and was sent overseas in February, 1944. Robert was sent to Italy by way of North Africa. He was assigned to the 30th Infantry Regiment, 3rd Infantry Division. The 30th was nicknamed the – ‘Rock of the Marne’, for their gallantry in World War I. This is also the Regiment to which Hero Robert Huss was assigned during the Korean War.

Private First Class Robert C. Edwards was Killed in Action on March 1st, 1944 in Italy. The telegram was a shock, especially since his parents had just received a letter from their son  ending with “Don’t worry, I can take care of myself”. Robert is buried at the Sicily-Rome American Cemetery in Nettuno, Italy. 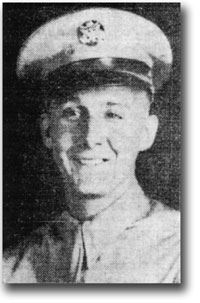