John C. Eicholtz  was the son of Clinton Shaffer and Mary Eicholtz Shaffer of Phoenixville, Pennsylvania. He entered the service two months after graduating with honors from Phoenixville High School. He was a member of the Baptist Church of Phoenixville.

Sergeant Eicholtz enlisted in the Army Air Corps in August,1942 at the age of 19. He graduated from Arial Gunner School in Fort Myers FL, where he then was promoted to the rank of sergeant. Before he graduated, he trained as a gunner on a flying fortress. In addition, he attended Radio School in Salt Lake City Utah. John was assigned to the 563rd Bomb Squadron of the 388th Bomb Group (Heavy). John was the youngest man in the squadron and became a gunner on a B-17 bomber.

The 388th Bomb Group was activated in December at Gowen Field in Boise, Idaho. John’s group was sent Knettisham Heath in England, a base originally constructed for the Royal Air Force. The Group became part of the famed 8th Air Force. John’s Squadron (563rd) flew a number of missions over Europe bombing enemy targets.  Early in the war with long missions exceeding the range of our fighters for protection, aircrew and aircraft losses were horrific. In two years of combat John’s bomb group suffered 538 Killed In Action, 112 wounded, 742 taken prisoner. 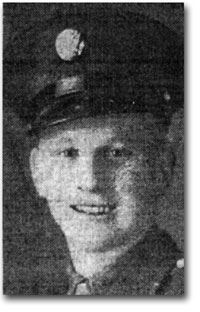 On the Bomb Group’s 11th mission to bomb Stuttgart, Germany, John’s B-17 was shot down.

Staff Sergeant John C. Eicholtz was Killed In Action on September 6, 1943. His family was notified on September 21 that John was reported Missing In Action. The information on his death was reopened by the German government through the International Red Cross. On October 19, 1943, the War Department in Washington DC released a list of 635 names of soldiers missing in action. Sgt. John Eicholtz was one of the names on the list. On November 4th, 20 year old John Eicholtz’s designation was changed to Killed In Action on the mission date of September 6, 1943. A memorial service was held at the Baptist Church of Phoenixville. John is buried at the Epinal American Cemetery in Vosges, France.