Homer F. Erb was born in 1913 and lived in Spring City, Pennsylvania. Herb was one of four children.

Homer was employed at the Diamond Glass Company in Royersford, and an active member of the Spring City Air Observers Legion. He later married and the couple had three children.

Homer was inducted into the Army, entering service on March 8, 1944. He received basic training at Camp Blanding, Florida. He was shipped overseas to the European Theater of Operations in September, 1944 and was assigned to serve with the 313th Infantry Regiment, 79th Infantry Division.

In mid December, 1944 the Germans launched a massive counter attack, completely surprising American forces, and causing heavy casualities. This attack was known as the  Battle of the Bulge. 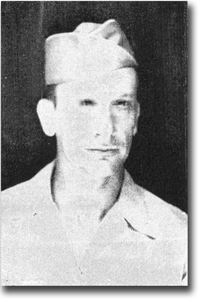 Private First Class Homer F. Erb was Killed In Action On December 16, 1944 during the Battle of the Bulge. He is buried at the Lorraine American Cemetery in St. Avold, France. His last letter home to his wife was dated December 7th, 1944. Homer's son, Hero Homer Anthony Erb, also joined the Army and was killed in in a truck accident while serving in Korea.