Joseph was drafted into the Army and after basic training was assigned to the 338th Infantry Regiment, 85th Infantry (Custer) Division. This is the same division that Heroes Leroy Barnes, William Carey, Walter Ford and James Marinelli served.

The 85th was the second all-draftee division to enter combat during World War II. The division was activated at Camp Shelby, Mississippi, in the spring of 1942. They received advanced training in the swamps of Louisiana, and desert training in California.

Joseph’s division arrived overseas at Casablanca on January 2, 1944. They received amphibious training in Algeria and then sent north of the Garigliano River to defend against the GUSTAV Line. The GUSTAV Line was a German heavily fortified defensive line south of Rome, which virtually ground the Allied forces to a halt. 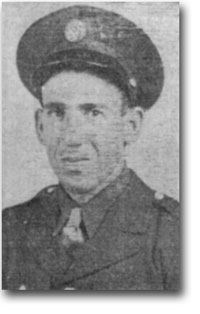 On May 11th Joseph's division launched its attack on the GUSTAV Line, breaking through and opening the road to the Anzio Beachhead. They continued to drive towards Rome, liberating the city on June 5th. Joseph wrote home that his unit went past their objective and captured 17 prisoners, an enemy machine gun, an anti aircraft gun, a 75 millimeter gun and 400 rounds of ammunition. He wrote that they “got a kick out of sleeping in beds they found in a deserted home… it was the best night’s sleep we had in a long time.” The 85th then attacked the mountainous Gothic line in August.  Private Joseph Farino was Killed In Action on September 20, 1944.He was buried in a local military cemetery, Castle Fiorentino, near Florence, Italy. In 1948, after the war, Joseph’s body was brought back for burial in his home country. Joseph’s flag draped casket received a military escort  from Philadelphia. Services were held on Wednesday November 17th. A Solemn Requiem Mass was celebrated at St. Mary’s, with interment at their cemetery with Full Military Honors.  Joseph’s brother Anthony also served in the war. 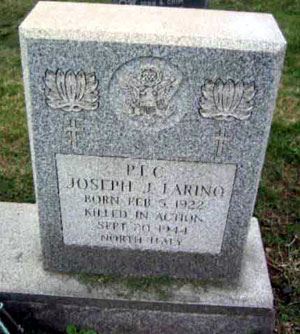