Franklin Franz was born in 1918. Little was found about his early life, but he made his home with the Raichle family in Kimberton from 1936 until he entered the Army just before Pearl Harbor.  After basic training, he was assigned to serve with the 107th Field Artillery Battalion of Pennsylvania’s 28th National Guard Infantry Division. Ordered into Federal Service in February 1941, the 28th was known as the “Keystone Division”, and nicknamed by the Germans the “Bloody Bucket” division because of the red Keystone Division patch and their vicious fighting.

Hero Joseph Kacanda of Phoenixville also served with the 107th, and heroes Morton Talley and Robert Emerson served in the 28th Division.

Joseph’s Division deployed to the European Theater of Operations in October, 1943 for more training in preparation for the liberation of France. On July 22nd, his division landed at Normandy on Omaha Beach - some 46 days after the June 6th D-Day invasion.

PFC Franklin Franz Died Of Wounds received in combat on August 2, 1944, in France. The Raichle’s were notified that Franklin was wounded on August 1st, and later notified of his death. Franklin is buried at the Normandy American Cemetery at Colleville-sur-Mer, France. 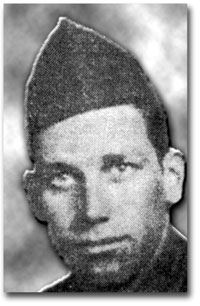