Peter Garyga was born in 1922 to Harry and Mary Garyga, who lived in Phoenixville, Pennsylvania. Peter was the fourth of five children. His parents emigrated from Austria.

Peter enlisted in the Army Air Force in November, 1943. He received training in Miami, Florida, and gunnery training at schools at Kingman and Tucson, Arizona and Lincoln, Nebraska as a waist gunner in a B-24 Liberator. Peter was assigned to the 779th Bomber Squadron, 464th Bomb Group.

Peter’s Bomb Group was sent overseas in February 1944, to Africa; Oudna, Tunisia. After additional training, the group flew to a temporary base in Italy, and flew their first combat mission on April 30th. Peter’s unit then moved to its permanent base at Pantanella, Italy, on June 1st.

On a mission against the Benzol Plant, at Linz, Austria, on November 15th, Peter’s B-24 was shot down. Sergeant Peter Garyga was Killed In Action on November 15, 1944.

Peter is remembered on the Tablets of the Missing in Action or Buried at Sea at the Sicily-Rome American Cemetery, Nettuno, Italy. He received the Air Medal with Oak Leaf Cluster (in lieu of a second Air Medal) and Purple Heart.

A memorial Mass was observed on February 14, 1946, at St. Peter & St. Paul Ukrainian church in his memory. 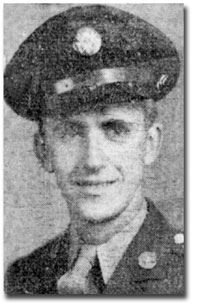