John E. Haines was born on March 25, 1923 to John and Nellie Haines who lived in Shamokin, Pennsylvania. John was an only child.

In 1942, the regiment conducted an amphibious landing in Morocco. On 10 July 1943, the regiment made an amphibious assault at Licata, Operation Husky Mollarella, Poliscia, Torre di Gaffe e Rocca San Nicola beaches starting the Allied invasion of Sicily. In 1944, it landed at Anzio, conducted a breakout and drove towards Rome. In August 1944, the regiment landed again, this time in Southern France as part of Operation Dragoon, advancing up the Rhone River to the German frontier.

After fighting in the Vosges and in the Alsace at the Colmar Pocket the 7th crossed the Rhine into Germany. Taking part in the seizure of Munich it headed for Austria, reaching the Salzburg area in the waning days of the war. According to another article published in a World War II magazine, elements of the regiment serving under the 3rd Infantry Division commanded by Colonel John A. Heintges had the honor of capturing Hitler's retreat at Berchtesgaden.

The same article argues that it is probable that no other regiment in the US  Army in World War II saw more combat time than the 7th Infantry.

Private John Haines was killed in action on January 30, 1944 in France. He is buried in the Gettysburg National Cemetery. 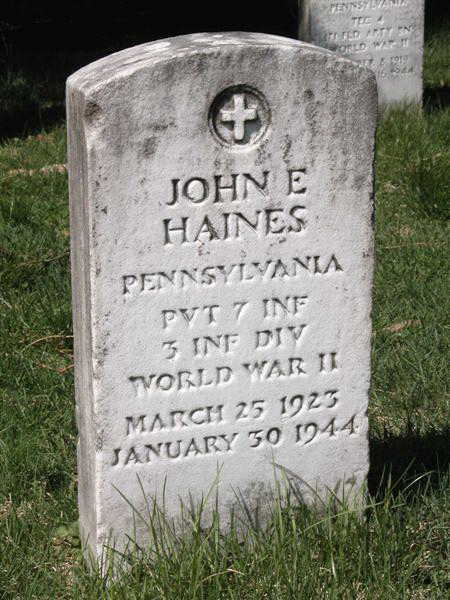