Charles G. Hall was born on March 17, 1918 to Catherine and Charles F. Hall who lived in West Chester, Pennsylvania. The family later moved to Phoenixville and Charles attended the Charlestown Consolidated Schools. Charles found employment at the Midvale Steel Company in Philadelphia.

Charles enlisted in Army Air Corps on July 10, 1944 and after training was sent overseas to the European Theater of Operations on January 25th 1945.

Private Charles G. Hall was killed in action on April 8, 1945 in Germany.  After the war, his remains were returned to his home country for his final place of rest. A service was held at the Hicks Funeral Home in West Chester on December 9, 1948. Services were also conducted at the American Legion, followed by interment at the St. Peter’s Reformed Cemetery.

His brothers Harold and Ernest served in the Navy during the World War II. 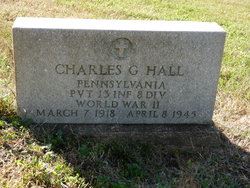